You are here: Products The Cartel, The Apprentice Volume 1 by E.G. Manetti 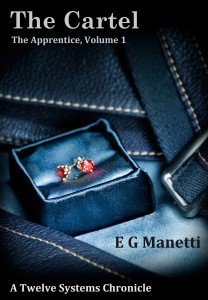 The Cartel, The Apprentice Volume 1 by E.G. Manetti

Raised to wealth and power, Lilian is left disgraced and destitute when her father is executed for foul crimes. To survive Lilian becomes the apprentice of a powerful warrior. For three years, he will train her for a position in the Cartels. In return, Lilian will yield him absolute control of her mind and body.

Lucius Mercio is the preeminent warrior of his Cartouche, and the Cartel it dominates; the Serengeti Group. Ruthless, clever and ambitious, Lucius intends to take his Cartel to unimaginable heights with the aid of Lilian’s brilliance. He faces only one obstacle. Lucius must keep Lilian alive.

The Twelve Systems Chronicles are E.G’s first published works. She works in IT and writes as often as possible. When neither goes well, she cooks exceptionally and gardens adequately. E.G. resides on the East Coast of the USA with her beloved (and often confounded) husband and their severely OCD Jack Russell Terrier.

In the end it was three years from the initial dream to the completion of the first volume finished because it took that long for the characters to reveal how everything ends. Each volume is a stand alone novel with a core conflict that gets resolved. As I write each volume, they tell me new secrets.

Be the first to review “The Cartel, The Apprentice Volume 1 by E.G. Manetti” Cancel reply