You are here: Products The Caged Man and the Witch: A Novella by E.J. Stillings 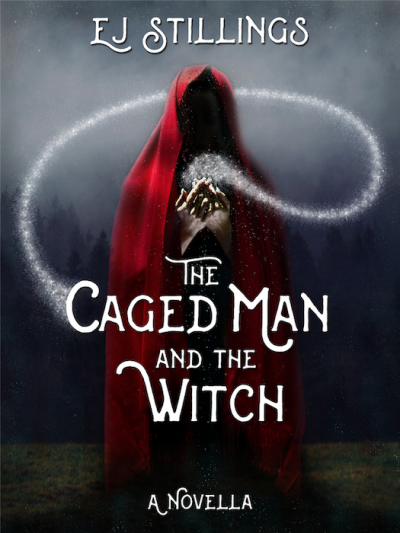 The Caged Man and the Witch: A Novella by E.J. Stillings

Henry, a handsome bachelor, is trapped in a cage and caught in a feud between a tyrannical king and enchanting witches, where one wants him as bait and the other as a husband. Brigit, one of the witches, is desperate for Henry to love her, but stealing his heart is more complicated than she anticipated.

E.J. Stillings believes in kindness and courage and learning something new every day. She often turns to nature for inspiration. When she's not writing, she can be found googling something, observing nature, reading, or taking pictures of her many rescue cats. She lives in Orlando, Florida, with her life partner, in a neighborhood with wild peacocks.

This story was inspired by a misty evening, a glass of whiskey, and thoughts of the previous Halloween. I wanted to try something new, a romance with magic and witches–all very different from my usual Contemporary Women's Fiction. However, I still wanted to keep it clean, as per my usual. Instead of purely physical attraction, I also wanted the focus to be on love and truth and soul connection. Basically, I've never found a book quite like what I wanted to write, so I wrote it.

Brigit ran through the woods in the rain. Her wet, blue dress snagged on twisted branches of a bush. The abrupt stop made her drop the basket of foraged food she’d been carrying. The caged man did not sleep, and now he would not eat.
The longer she had watched him, the more a strange feeling stirred within her — something good amidst the guilt of playing a part in his imprisonment.
She conjured a shimmering mist from her palms, which formed shelter above her. Tendrils of the mist flowed from her fingertips, which collected the stray berries and nuts and freed her dress from the bush.
Her mind wandered back to the moment his gaze found her. A seed of doubt sprouted within her. She'd only managed one step forward before the fluttering in her heart urged her to retreat. How was it possible a part of him appeared to recognize her despite the enchantment she and her sisters had cast on his memory? How was it she too felt something familiar about him?
She’d learned from listening to him that his name was Henry, but couldn’t recall ever meeting him before. He was simply a suitable man in the woods. Could she go through with the spell if she could not even face him?
The rain continued to pour. Frustrated and sopping wet, Brigit transformed herself into a vapor and traveled to her home in the woods.

Be the first to review “The Caged Man and the Witch: A Novella by E.J. Stillings” Cancel reply