You are here: Products The Bowman’s Inn: Autumn by E.M. Youman 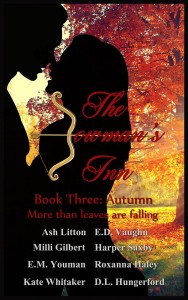 The leaves are turning red and gold in the city of Anteros. All Hallows Eve opens the gate between the worlds of fantasy and reality. Anything could happen as you look for your Soul Mate. And of course there will be a costume party at The Bowman’s Inn. The bartender, Valentine Archer, will know just what you need. He not only looks like a Greek god, he used to be one. Cupid prefers to be called Val these days. But he still knows how to bring people together.

Eight authors have combined their talent to bring you a collection of tales with romance, mystery and maybe a little humor. The delightful short stories feature characters who own or operate the facilities of the Bowman’s Inn or are just passing through. Whatever the case, Cupid has a way to help each of them find what their hearts require.

E.M. Youman is a freelance writer from Oakland, CA. Some of her short stories have been published by Black Cat Press, S/tick Magazine and IFF. When she’s not writing fiction, E.M. Youman, works at an independent record label and runs a music blog. She has a B.A. and Master in Communication and is currently working on her first romance novel.

I was invited into a mutli-author anthology by Demi Hungerford. She’d created a beautiful world where Cupid helps patrons, who visit his bar, fall in love. After reading the first story about Mandy and Val, Karis and Ari’s journey began to take shape.

Be the first to review “The Bowman’s Inn: Autumn by E.M. Youman” Cancel reply