You are here: Products The Billionaire’s Maid by Natasha Ryder 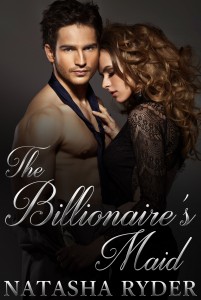 The Billionaire’s Maid by Natasha Ryder

A real-life Cinderella story with a kinky twist!

Working for billionaire Alejandro Vega is a job that anyone would kill for. Rich and handsome, and with a reputation for treating his staff with incredible kindness and paying them fairly, he’s a boss that is one in a million. Anyone would love to work for him. Anyone except for her.

When curvy, spirited Melina Martinez lands the dream job, which she only ever wanted out of pragmatism, she isn’t prepared for just how handsome her new boss is. Nor for how he makes her feel every time she looks at him. He’s flat out the most desirable man she’s ever laid eyes on, and it isn’t long before neither of them can deny the draw between them.

But there’s more going on at the billionaire’s mansion than meets the eye. Melina realizes that one of Vega’s most trusted has it out for her, and that’s all before two little pink lines tell her that she’s pregnant with the enigmatic billionaire’s baby. Melina has a mystery to solve, a love life to sort out, and a family to support, but the clock is ticking, and she has to figure out her own life before she can bring another one into the world.

Can a proud young woman find a match with a man who’s cut all ties to his heritage, the same heritage she loves and knows better than anything? Can she help him see the value of family once more? What will Alejandro Vega do when he realizes his maid is pregnant with his heir?

Will Cinderella get her handsome prince in the end?

When she’s not writing, she enjoys hiking, reading, all sorts of music, and playing with her adorable three cats.