You are here: Products The Billionaire Biker’s Bitch 1 by Layla Wilcox 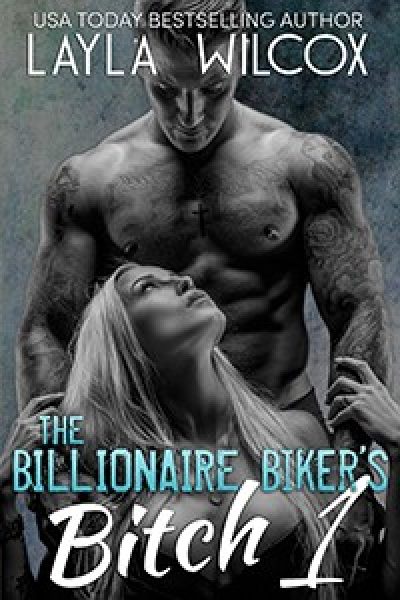 It’s Friday night and Claire Davenport is on her way to meet her friends and celebrate her freedom. She’s almost run off the causeway when a ninja biker pulls a wheelie in front of her. But all that’s forgotten after a few drinks, and once on the dance floor, she allows a sexy, muscular stranger to lead her to a darkened hallway in the back for a quick hook up. As he walks away, the writing on the back of his shirt reveals he’s the daring ninja biker.

It’s Monday morning and billionaire CEO Alexander Harriman is about the address his new employees at the company orientation. His eyes are drawn to a pretty blonde with the face that’s haunted his dreams since Friday. Claire. Next on the meeting’s agenda: Rule No. 5. Relationships between employees are forbidden and will result in termination.

When not penning sexy, romantic short reads, Layla keeps busy by plotting out plans to travel the world with her photographer husband.

Jillian leaned in close to Claire as they headed to the dance floor and almost yelled in her ear to be heard over the music. “When do you start your new job?”
Claire put her head close to Jillian’s ear. “Monday, unfortunately. So I only have the next few days to totally let loose. Come on, let’s get started.” She pulled her friend onto the dance floor.
It was close to one o’clock and the scene at Charli’s was wild. The pulse of the music could be felt through the dance floor, which was mostly populated with women dancing with each other.
“Perfect,” thought Claire. “Just what I need to unwind.”
She threw her arms up, closed her eyes, and let the beat take control. One song blended into the next and soon the rest of Claire’s friends joined them.
A crowd had gathered around them as they bumped and gyrated. The girls had been going out as a group throughout their college years and had developed their own dance moves and routines, which they loved to display for the club crowds. Claire wasn’t sure if it was a particularly crazy night, or just the way she felt now that she had graduated, was free of Justin, and was heading toward a new life, but when the crowd began to chant, “Take it off!” she felt wildly uninhibited.
She caught Danica’s eye and saw her nod. The two of them moved to the middle of where their friends were dancing and began to put on a show, holding each other’s hips as they wiggled and swayed to the music. Keeping their eyes on one another so they could move in unison, they began to lift their tops over their heads. The crowd cheered wildly as the girls tossed their skimpy tank tops up in the air.
The floor began to fill with men as more girls removed their shirts. Claire was vaguely aware of a tall muscular man approaching her. She thought he seemed intently focused on her as he brushed aside at least six possible dance partners on his way over. Without looking right or left or asking permission, he put his hands on her hips and began to move in time with her.
Claire realized how big he was when she felt his hands almost encircle her waist, yet his touch was gentle and sexy. She looked up at his face, now close to hers, and smiled. Something about him was reassuring. It didn’t hurt that he was drop dead gorgeous and built like an athletic Adonis. Just how she liked her men: tall, with dark hair, blue eyes, and buff.
He was a good bit taller than her, and her face was level with his massive chest. She squinted. She didn’t know if was the drinks, the swirling lights, or her imagination, but his tight shirt seemed transparent, and every ripple of his sculpted upper body appeared visible beneath his shirt.
As they danced, she leaned her head into his chest and closed her eyes, letting him guide her on the floor. He smelled of the outdoors, like he’d just been at the beach. It had a calm and intoxicating effect on her already inebriated consciousness.
She dreamily followed his lead and was vaguely aware that they were no longer on the dance floor. They were still dancing, but the surroundings were now much darker, and Claire realized she was in the hallway outside the restrooms, but he danced past them and around a corner to another darkened area.
It was here that they stopped, and he bent his head to kiss her, pulling her tight to his chest. Claire put her arms around his neck and opened her mouth to receive his tongue. He tasted of good liquor, she noted, and pressed her lower body into his. She felt almost under his spell and made no attempt to stop his hands as they roamed over her breasts.
She threw her head back as his lips moved down from her mouth, to her neck, and continued to her chest. One of his hands slipped behind her and unfastened her strapless bra, which fell the ground unnoticed. Claire was chesty for a small girl, but his big hands covered them with room to spare. Yet, he was gentle as he squeezed and tweaked her nipples, moving his soft warm lips from one breast to the other.
Her whole body was throbbing. His hands dropped and roamed down her sides while he continued to kiss and suck her breasts. She felt his thumbs slide under the waistband of her tiny skirt and sweep across her pelvic area. A moment later, she felt a tug and her skirt was around her feet.
He stepped back to look at her, standing before him in the dimly lit hallway. “What’s your name?”
“Claire,” she said.
They held each other’s gaze for several moments, and Claire once more felt enchanted by him. He was so good looking, but also something more. Commanding, but not threatening in any way.
She rested her back on the wall to steady her wobbly legs. He leaned in, supporting himself with one arm against the wall above her, and brushed his other hand lightly over her panties and across her sex.
“Claire, I want to kiss you here,” he said, pressing slightly harder and moving his index finger down, first to her clit and then continuing the path of her slit until he reached the midway point between her legs.
Claire’s breathing was jagged, and she gasped as his finger pressed upward. Even over the silky fabric, his touch caused bursts of electricity up to her core.
“Does that mean you want it, too?” he voice was barely above a whisper, but she heard him clearly.
“Yes.” She spread her legs a little wider.