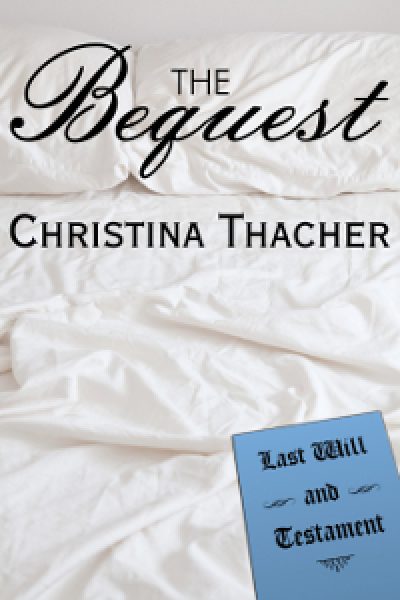 Sara leads a double life: CFO by day, sexual submissive at night. When her Master dies suddenly, Sara discovers his will leaves her to his nephew, as though she’s a valuable piece of furniture. She’s ready to move into a hotel when she gets her first sight of the new owner, gorgeous six-foot-five Cal. Sara has a sudden desire to kneel at his feet. Only problem, he’s not a Dom.

Cal, a gifted but impoverished composer, barely knew his uncle. So it’s a shock to inherit Bruno’s fortune … and his sexual submissive. Under the terms of the will, they’ll have to live as roommates before Cal can deed the house to her. Smart, lovely and graceful, Sara drives Cal crazy with desire. Only problem, he’s not a Dom.

Cal is used to directing an orchestra to create the performance he wants, but he has to visit The Club to understand why his uncle left him The Bequest.

The law—in this case, a will—puts two people into a certain real-life situation. There’s a lot of hot sex and a happy ending. Which, frankly, is more than my legal career provides…but at least I get to write about it.

The lawyer looked at him. Assessing him in some way. Cal just looked back. Not a staring contest, precisely. More like a test—a test Cal suspected he was passing.
The moment ended and Lyon continued with his dry-as-dust explanation.
“There are other legatees, but those bequests are relatively small. I believe the largest is fifty thousand dollars.”
Relatively small? What exactly was this guy getting at?
Cal’s throat closed. In music, he’d know exactly what was coming next—a key change, a crescendo, a change in tempo. The cue to the listener that said, “This is about to get really weird.”
Once again, they stared at each other. Finally, the lawyer said, “You inherit the rest.”
“Wait—the rest of what?”
“It was Bruno’s wish that you step into his life. His houses, his cars, his wealth, everything.”
“Oh.” It was impossible to comprehend what an uncle he barely knew had wanted. Plus, the music hadn’t shifted yet. Cal braced himself.
Lyon looked down at his hands, which were large, with slender fingers. They made Cal’s hands look like ham fists.
Cal could feel the transition. He could hear it in his head.
“One more thing. Bruno left you Sara.”
Wait—what? “I don’t think—what did you say?’”
“Bruno was the master to a sexual submissive, Sara Braverman. I drew up the agreement between them. He’s left her to you.”
“Can you leave someone to…uh, to someone else? Is that even legal?”
Mackenzie Lyon smiled, a wide curve of his lips. Cal’s question amused him. “Of course not. Bruno and Sara’s arrangement was a fully consensual relationship that could have been terminated at any time by either party without legal penalty. The Thirteenth Amendment of the Constitution has outlawed the ownership of human beings. Furthermore, it is contrary to societal norms to enter into a master-slave relationship. Thus, their legal arrangement could not be enforced in a court of law.”