You are here: Products The Audition: Carnal Cuisine by Andi Lee 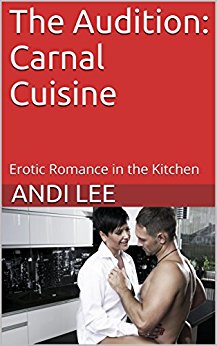 Dinah Stewart loves cooking and her dream is to become a top NYC Chef. She is sure she’s found her big break when she answers an ad to audition for a TV cooking competition show.

At the audition, when the strapping young producer begins rubbing up against her as she’s about to start cooking, she wonders just what she’s gotten herself into.

Someone’s in the kitchen with Dinah. How far is this timid home cook willing to go?

You’ve always wonders what it was like behind the scenes of those cooking competition shows, well the heat isn’t only in the oven.

Be the first to review “The Audition: Carnal Cuisine by Andi Lee” Cancel reply