You are here: Products The Assassin’s Legacy by D. Lieber 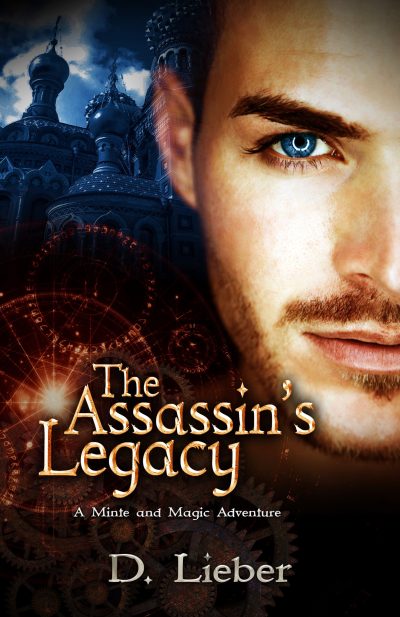 The Assassin’s Legacy by D. Lieber

He hasn’t been Aleksandr Sergeyevich Volonov, legendary monster-hunting assassin for ten years. Now, he is only Sasha, charming deckhand on a merchant airship so recently destroyed by pirates.

All he wants is to find another job and keep moving. But that simple plan is thwarted when his sister sends an assassin to murder him. His only choice is to return to Saint Petersburg and renounce his claim to his family’s title.

Trapped by his late father’s machinations, Sasha finds himself surrounded by death threats, engaged to a brutal villainess, shadowed by his cheeky assassin, and forced to lead the organization bent on eliminating all supernatural creatures from the Russian Empire.

As he struggles to keep hold on the man he is, Sasha must face who he used to be in this modern steampunk fantasy adventure full of folklore, banter, and artifice.

D. Lieber has a wanderlust that would make a butterfly envious. When she isn’t planning her next physical adventure, she’s recklessly jumping from one fictional world to another. Her love of reading led her to earn a Bachelor’s in English from Wright State University.

Beyond her skeptic and slightly pessimistic mind, Lieber wants to believe. She has been many places—from Canada to England, France to Italy, Germany to Russia—believing that a better world comes from putting a face on “other.” She is a romantic idealist at heart, always fighting to keep her feet on the ground and her head in the clouds.

Lieber lives in Wisconsin with her husband (John) and cats (Yin and Nox).

The book is a spin-off sequel to an earlier steampunk fantasy adventure called The Exiled Otherkin. Sasha was a side character in that book that I spent a lot of time on because I needed him to come off in a certain way. To be honest, I originally killed him in the first book. But my betas were so upset that I unkilled him in a later draft. Thank goodness I listened to them! He was a great character, and I wanted to explore him more. I have always been interested in the history of the Russian Empire, and the idea of love blossoming between two people who were trying to kill each other seemed fun to me.

As I unlocked and opened it, I met Liza’s grey eyes. Her gaze traveled over my body, taking in my bare feet, my only recently replaced trousers, my still unbuttoned shirt. Are her eyes lingering on my exposed abdomen? Finally, she took in my grin. I knew she was only there to make sure she knew where I was, but that didn’t stop me from provoking her.

“Did you miss me, Kisa? Could not bear the thought of not seeing me until morning?” I opened the door wider and added heat to my tone. “You could join me if you like.”

Her face flushed, and her eyes sparked like sharpened steel as she squinted at me. “I just came to see if you needed anything before I went to bed.”

I tilted my head at her. “Are you certain that is all?”

She stood up straighter and sucked in air, her nostrils flaring in irritation. It took a great deal of effort on my part not to laugh.

“What else could I possibly want from you, Aleksandr Sergeyevich?”

I shrugged lightly. “Women have wanted a great many things from me. How will I know if you do not tell me, Kisa? Tell me what you desire, and I will give it to you. I am very accommodating.”

She just stared at me for a few silent moments. “Goodnight, Aleksandr,” she stated firmly before turning on her heel and stomping to the door beside mine.

“Goodnight, Kisa,” I called sweetly, chuckling under my breath.