You are here: Products The Arrangement by Jennifer Lewis 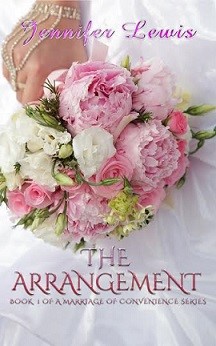 The Arrangement by Jennifer Lewis

She’s got everything under control. He always gets what he wants. What happens when he makes an offer she can’t refuse?

When Ashlyn Gray’s father passes, he leaves one shocking stipulation in his last will and testament. If she wants him to continue funding her education, she will marry. For an entire year. At 23, Ashlyn doesn’t want to date anyone, let alone marry.

At 25, Deacon Cross is a self-made billionaire. He has no time for love. But he needs a wife, and he needs one fast.

Enter Ashlyn. The perfect answer to his dilemma; and he thinks, the answer to hers. Their attraction is off the charts, but Ashlyn doesn’t trust Deacon and he isn’t about to let his guard down.

Can these two really stay married for an entire year?

I live in the great Pacific Northwest, in a beautiful area of Washington State. When I'm not writing, reading or hanging out with my family, I can be found working as an RN in a local hospital. I've been writing since age 11, and the older I got, the more I loved romance. There is something about following two characters on their journey through the ups and downs of love – and being there when they finally admit their feelings for one another. I doubt I will ever stop writing!

I love marriages of convenience, contemporary or historical. I began thinking of characters and then wondered what story I could tell for them. The rest, as they say, is history!

It felt like someone slammed a fist into her chest and buried it so deep she would never breathe again.

Ashlyn Gray pulled herself up, spine stiffening under the weight of the words hovering in the air. Her fingers bit into the wooden arms of the chair so tightly they ached. The lawyer’s lips continued to move, but static filled her ears and gray clouded her vision. Her blonde braid slapped against her cheek as she shook her head to clear it. A knot formed in her throat and she tried to swallow around it. Could this day get any worse?

Crossing and uncrossing her legs, she forced her hands to relax. She smoothed her damp palms on her simple, gray slacks and raised a finger. The lawyer stopped, adjusting his wire-rimmed glasses.

“What did you just say?” The question came out hoarse.

The lines between his brows creased. “Which part, Miss Gray?”

“You know very well which part.” Her mother fanned herself with her purse. “The part about me not keeping my house or money if Ashlyn does not marry in two months! Two months! What in the world was he thinking? She isn’t even dating!”

“Mother.” Reaching out, she grasped her mother’s arm and forced her to lower it before her purse became a projectile and Ben, her father’s lawyer, became the target.

“It’s as I said. Mr. Gray stipulates that in order for you to receive your inheritance you must marry within two months and remain married for a year. He put up provisions to continue to fund the remainder of this school year at the university, provided you get married as stated. Should you decide to not marry, you forfeit your inheritance and your mother is turned out of her home. Further, she will no longer receive an allowance.”
The horror on her mother’s face was almost comical. What would happen to Ann then? Would she be forced to rely on the charity of her friends or worse, would she have to work? Ashlyn knew for a fact that her mother hadn’t worked a day in her life.

Dropping her chin, she bit her lip and struggled against the insane urge to laugh. She could feel hysteria closing in and was unable to remember when she experienced a worse week. First, her father passed from a cancer she didn’t know he fought. The funeral was a circus, filled with people she knew didn’t care for him and who surrounded her sobbing mother with false condolences. Now, at the reading of his will, he played the final card, his ace, his last laugh. “Well, Ashlyn, what are you going to do about this?” The tone of her mother’s voice rose with each word, assaulting the insides of her ears.

Summoning every ounce of control she possessed, Ashlyn raised her chin and assessed the lawyer. Face calm, she kept her voice level. Losing her cool at this point would serve no one.

A glance at her mother told her that Ann had yet to recover. Ashlyn averted her eyes. She could no longer watch her open and close her mouth like a dying fish.

“We will, of course, request a copy of the will.”

“Yes, of course,” the lawyer slid a finger down the page. “But I assure you, it is sound. I drew it up myself.”
Ordinarily, a confident lawyer would be reassuring, but this man held her future hostage. She could only see that future moving farther out of reach. Her father knew that her career was the most important thing to her. While her peers partied, she scouted schools. Instead of dating, she focused on her career. She had known since she was fourteen what she wanted to do with her life.

What was her father thinking?