You are here: Products The Arithmetic of breasts and other stories by Rochelle Potkar 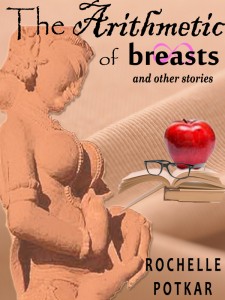 The Arithmetic of breasts and other stories by Rochelle Potkar

This cluster of 7½ literary short stories presents to you the romantic-sexual facets of: Narain who lusts for Munika, hypnotized by her bosom in The Arithmetic of Breasts, and old Jaganlal who wants a favour from young Dia in The Room with a Sea-view.

Jackie who is in love with Nic in Sky Park, and the surgeon in Dr. Love who is changing much more than Sneha’s hairline, nose, lip and chin.

Shonali and Neel who are realizing that infidelity might not be such an easy thing in The Scent of a Conscience, and a woman who walks the tight rope between tradition and sexual exploitation in A place they call Scary.

And, Sunil who meets the woman of his desires in What Men Want through an adult dating site.

Through these stories, Rochelle Potkar explores the intensely personal ‘unrelationship’ that exists alongside its conventional twin, the relationship.

She lives in the ‘pandoramic’ city of Mumbai, with people real and imagined.

I had too many short stories brimming over my laptop and the time had come to cluster them logically and shoot them out into the world of story lovers, so that I could have the space to write some more.

Dia had been drunk the night she met Satish. He was late to get to the pub that was thrashing like a beast with heartbeats. She had started on her third Long Island. It took her only two drinks to get past her range of polite defenses and bring loathing boiling from the core to her surfaces – a chaos waiting to unfurl at the first snap, the first right question.
“What is wrong with you, Dia?” asked Satish.
Over the telephone she had told him she was bordering on a breakup, which made him hurry to the place they were to meet. Dia broke up every few months with her boyfriends, each association lasting like a season of three to four months. But this one was different, although he remembered her saying that for each one of them.
“No, this was really different,” she had insisted and they went along with their drinking. This one was an intellectual. He could talk. They could talk. Being with Karthik made her feel as though her soul had escaped, like a bird from the confines of its narrow cage into the vast, extravagant spaces of his skies.
“What about the love?” Satish asked. For he knew Dia always had it, at least, once with each man before moving on. Repeating things were not her habit and the novelty would die down soon, but here it had been five months and they had only kissed.
Why?
Because the rest of the time was spent in talking. Yes, speech. She should have been devastated but she wasn’t. There was something else in her rhythm that night in the dim-lit pub that seemed to be underneath her drunkenness and the slope of her wilting eyes.
Love? Was she…?
No. She wasn’t sure. What was love? How was it defined? Wasn’t it being lonely or young or hormonally supercharged? By that definition she could have been in love four times a year. Did it matter? When they couldn’t even define what it really was.
A certain togetherness? Familiarity? Recurring fondness? Memory? Or habit?
This was unusual, she insisted, starting on her fourth glass. Karthik was intriguing. He could take her through a maze of presumptions and superimpositions on art, mythology, culture, cuisine, ethnicity, aesthetic, design. The last he had spoken on Arjun in Draupadi’s swayamvar*, of how he had propelled the arrow into the eye of a revolving fish above him, by looking at its revolving reflection in a pool of water below. ‘How acutely would Arjun have concentrated to calibrate the revolving reflection to its original?’ Karthik had said, soothing her hand, and it had turned her on.
No, this was a matrix of deliberation over a labyrinth of longing. By the time they were done talking there was hardly any time to get on with a skin-on-skin action.
Was his desire weak? Libido low? Or morals high? Did the thought of his wife interfere during their various rendezvous? Why was it taking him so long?
She wasn’t dissatisfied with the experience, she told Satish, only confused and impatient, because of her habit with men to not last long – certainly no longer than a few months.
What if he was in love with her?
How would she know? Wasn’t the finiteness of love a discovery in retrospect? Like the gathering of dust by sweeping over a large place?
So Dia had decided it was enough. It had been five months, threatening on the sixth. A decaying, physically-boring relationship with just talk, annoyed her the most. Though the patient way with which he enjoyed talking to her was more than how other men had enjoyed making love to her.