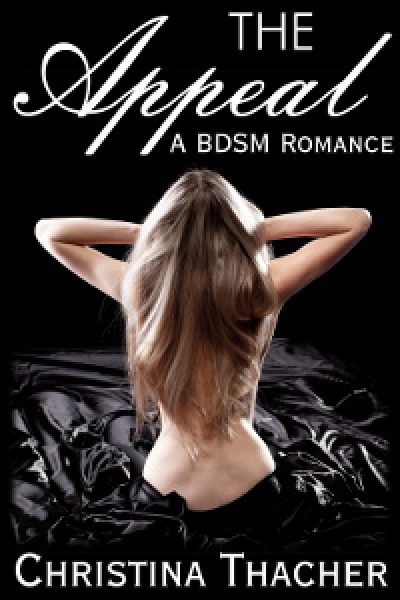 Diana Truscott feels certain that walking into a dangerous situation will get her killed. Instead, she gets introduced to Mac Lyon, a Dom to heat her body and melt her heart. When she has to leave him, she leaves her soul behind.

What would happen if the woman Mac can’t forget were to return?

The Appeal is Mackenzie Lyon’s story–of how he fell in love, lost his love, and became the Dom you’ve enjoyed in the two previous books in the series: The Bequest and The Negotiation. Mac is also the reason I wrote the series in the first place–I love the idea of a really cerebral Dom, someone who thinks about everything and is thus caught off guard by love.

“May I serve you, please, Master?”
The sub at Mac’s feet was lovely, with hair the color of polished oak and a mouth made for sex. The light in her eyes suggested a desire that pulled at Mac.
He’d seen this sub before and she’d always grabbed his attention. That was the thing about The Club. Everything and everyone was out in the open. Fitting for Washington, D.C., where appearances counted more than substance. The Club catered specifically to BDSM, but no one was fooled. To really enjoy its membership, one had to be a voyeur, an exhibitionist or a little bit of both.
These days, Mac’s interest rose more from his judicious concern for The Club’s survival than from his own desires. That was his role at The Club—he made sure everything ran smoothly. The two—his own sexual desire and his professional oversight—used to work in tandem. Recently, though, he’d been less interested in quick scenes just to get his rocks off. Looking at this woman on her knees, though, he felt again the way he had those first few months—like a kid in a candy shop.
He’d watched her before. She was graceful in a way that suggested she thought about every move and gesture she made. She wasn’t robotic, like some of the subs. At the same time, she clearly wasn’t attracted to the men she played with.
And she’d noticed Mac before tonight. He’d caught her glancing at him. She was respectful, but interested. Again, he couldn’t quite say why her looks had heated his blood. They just had.
How long had it been since he’d felt this tug? The slight smile on those gorgeous lips kindled desire in Mac, a hot rush he’d experienced like seeing a long-lost friend. He fought the urge to say yes.
He looked over at Reginald Berch, the Dom wannabe who’d clearly instructed his sub to approach Mac. Berch nodded solemnly. Mac’s stomach clenched. Berch had barely been elected as a member of The Club, where politicians, legislative aides, lobbyists, and fat cats like Berch acted out their kinky scenes. Mac had opposed Berch’s membership—too many rumors about his not caring about minimum age limits and pesky issues like full consent. A couple of congressmen and a senator had insisted, though. Still, The Club would seem to be tame by Berch’s questionable standards.
Now Mac began to see why Berch had bothered. He wanted something from Mac, and this lovely sub was the bait.
“What’s your name?” Mac’s hand moved to caress her chin. He stopped short, though. From Berch’s angle, it would look like Mac was touching her.
“Diana, Master.”
“I’m not your master, Diana. I thought Mr. Berch was.”
Her eyes fell. He felt the loss of their glow, as though a candle illuminating a glass of pale sherry had been blown out.
“He is,” she whispered.
“Did he order you to serve me?” When she hesitated, he hardened his voice. “Don’t lie, Diana.”
“He did. But I need to speak to you.” Her eyes opened wide, fixed on him. “He wants you to take a campaign finance case of his to the Supreme Court. He thinks sharing his—well, me—he thinks that sharing me will soften you up.”
“Why are you telling me this?” Mac struggled not to grab her and pull her away from Berch. She seemed too clean, too good for him. The man was a slug. A very wealthy, very powerful slug.
Her gaze dropped again. “I want something from you as well.”
“He’s watching us. We can continue talking, but we’d better start doing something or he’ll wonder what sort of negotiation about safe words and hard limits can take this long.” Mac rose, holding out a hand to help Diana to her feet. He nodded at Berch without quite making eye contact.
They turned away from Berch and went to one of the other rooms. There were no private playrooms at The Club and Berch would surely want to watch. What could they do together that would allow her to speak to him without Berch noticing?
They’d gotten to the third room when Mac spotted the swing. He nudged Diana’s hip. “Would you be willing to use the swing? I can put on a show that should satisfy Berch, then if you’ll permit me to fuck you, we can talk. Okay?”
She ducked her head so her molten-honey hair fell forward. “That would be lovely, Sir.” He could hear the smile in her voice. And the relief.
Mac didn’t allow himself to smile, but he was more aroused than he’d been in years. This woman was a puzzle, an enigma. He sensed she really did need him. And not strictly as a Dom. He wasn’t too proud to admit it—someone needing his help was like catnip to him.