You are here: Products The Advent of Lena, a Tale of Beauty and the Beast by Neil M Campbell 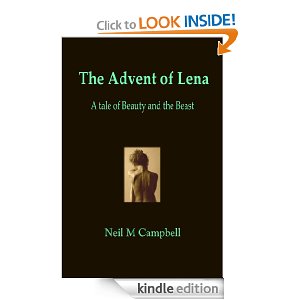 The Advent of Lena, a Tale of Beauty and the Beast by Neil M Campbell

Chloe Lambert is used to men looking at her twice but for all the wrong reasons – they cannot believe how ugly she is. She has no reason to think Park Delafield, of the perfect profile and cheek bones to die for, is any different when he insults her in a pub. But all is not as it seems, turns out he’s looking for salvation and has decided she’s the one. Only trouble is, Chloe’s not so sure.

When a stranger in a bar loudly comments on her appearance, Chloe Lambert can only assume that the remark which cut her to the bone was for him simply a casual aside. Park Delafield, however, at once struck down for his savagery by a friend of Chloe’s, is visited in his humiliation by the insight that only the love of the woman he has offended can redeem the despicable individual he has become. He sets out to win Chloe but she, bewildered by his attentions and repelled by his egotism, wants no part in his quest. Until his tireless persistence, combined with her own curiosity about his true personality and motives, soften her distrust of his sincerity. Warily she allows him into her life, thus seeding hurricanes of self-discovery, reckless commitment, and searing betrayal through which all involved journey toward disaster . . . or liberation and redemption.

The story of Beauty and the Beast has fascinated me since childhood. I was swept away by La Belle et la Bete – still am every time I see it – but it wasn’t until an event described above took place in my own life that the seed was planted which later became The Advent of Lena.

She was strong, complex and compelling, that much he had confirmed from those moments in her company. Although her chariot had moved on, the flame of her scorn lingered about his heart and with the pain, hope. For he had sensed challenge mixed with her derision and challenge implied interest, however hostile. All sense his mission might be ill conceived, any thoughts of abandoning his quest vanished as reservations gave way to final conviction their futures were linked. Their first glimpse of each other, not the remark, had precipitated both assault and epiphany.
Yet, although the belief that his salvation lay through her had become an article of faith with him while on his knees in the pub, the mechanics of his renewal remained unclear. These he must discover for himself. For now he only understood that, as one would frequent a place of worship, the means of grace, in order healing might take place, he must ‘attend’ Chloe, wait upon her.

Be the first to review “The Advent of Lena, a Tale of Beauty and the Beast by Neil M Campbell” Cancel reply