You are here: Products Testament: The Trial by Edward V’Kanty 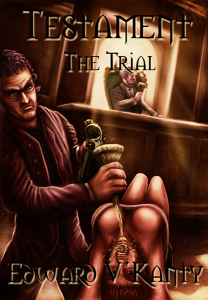 Testament: The Trial by Edward V’Kanty

For the first time anywhere, Testament draws the reader into the New Yorke witch trials! Experience this 17th century horror firsthand and decide for yourself whether or not to condemn the accused for heresy and witchcraft.

Testament: The Trial It is a matter of public record (and public knowledge) that, in the year 1692, the infamous witch trials swept through the colony of Salem, Massachusetts. While precious little may be known about the witch trials of Salem and those witches that the good puritans of Salem persecuted, there is even less known about the witch trials that swept through the remainder of the Thirteen Colonies. For instance, in 1665, twenty-seven years before the Salem witch trials, the people of New Yorke believed themselves to be plagued by the devil’s works and so the New Yorke Court of Assizes was established to deal with this spiritual epidemic. The New Yorke witch trials began with a very unusual case of witchcraft and heresy: that of Ralph and Mary Hall.

The following fictionalized book is based upon the trial of Ralph and Mary Hall, accused of practicing witchcraft and sorcery against the family of Ann Rogers. This book takes a look at what may have happened and how New Yorke, like Salem, could have fallen prey to the fear of witchcraft.

There is but one catch: You, the reader must determine the path this colony is to follow. There can be no greater responsibility than to be called upon to serve as a juror in these witch trials. After reading the journal entries of apprentice magistrate Singent Straubb and the court documents regarding the trial of accused witches Ralph Hall and his wife Mary, how will you cast your verdict?

Testament Verdict: Guilty You have chosen to convict the Halls and condemn them to death as witches. Now read the remaining entries in the journal of Singent Straubb to learn what fate your verdict has had upon the entire colony of New Yorke…

Testament Verdict: Not Guilty You have chosen not to convict the Halls and they shall be released forthwith. Only the journal of Singent Straubb may tell what fate your verdict will have upon the entire colony of New Yorke…

I have always been interested in the history of the Salem witch trials and I ultimately began researching witch trials in other parts of colonial America. It was interesting to learn that New York had its own witch trials and I felt that was something I’d like to explore in a fictional story.

Be the first to review “Testament: The Trial by Edward V’Kanty” Cancel reply