You are here: Products Tess – Valkyrie Awakening by Andres Mann 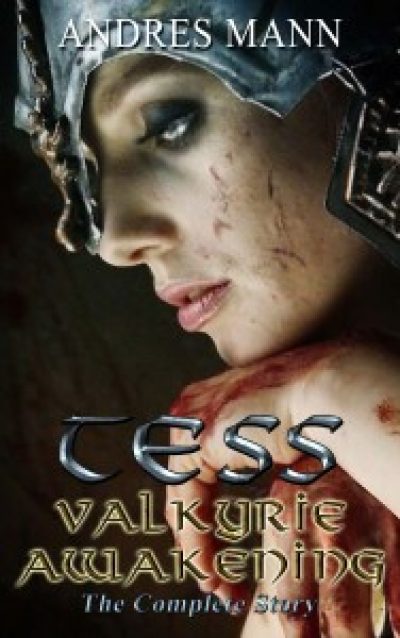 A fast paced and erotic action novel set during the second Gulf War in Iraqi, three remarkable people are caught in a web of obsession and deceit. Tess is a military helicopter pilot; beautiful, aggressive and relentless. She awakens as real woman due to the love of two men: Jake, a brilliant CIA agent and Amir, a wealthy, charming, sophisticated but dissolute Iraqi general who initially captures Tess and becomes obsessed with her. Tess escapes but must fulfill a commitment to take something from Amir. After meeting in Istanbul, Amir persuades her to spend time with him in France and England in exchange for what she is seeking. Here she meets Fadime, his alluring and decadent sister. In the end, Amir deceives Tess. She returns to Iraq, trying to overcome her heartbreak by flying dangerous missions and rescuing wounded soldiers. An unforeseen event changes everything. Tess and Amir continue to square off in an epic struggle, each wanting the same thing. Aided by Jake, Tess’s friend and co-pilot Carmen and their colleagues, Tess must overcome Amir’s vicious attacks motivated by his continuing obsession with her. They repeatedly clash in a succession of encounters in Baghdad, Amman, Istanbul, Sorrento and New York. Carmen finally meets her soul mate in Nicola, who helps her overcome the traumas of her youth and becomes a valuable member of their team. The two women respond to their challenges by drawing on their skills as skilled pilots and fierce warriors, battling Amir, who not only hurt Tess but plans to take over the Iraqi government. Their struggle leads to a series of violent and bloody battles in the air and on the ground. A heartbreaking loss at the end is redeemed by a final poignant resolution.

Action, intrigue, deceit, obsession, sensuality, the use of wealth to achieve one’s goals, the struggle between good and evil are a constant theme.

I have been fortunate to meet remarkable people from all over the world, most of them good, others not so much. My novels essentially retell the stories inspired by the actions of real people in challenging situations. I believe that it is interesting to understand multi-faceted personalities that are interesting and evil at the same time, making it difficult to make quick judgements about right and wrong.

Chapter 25 — Stallions
The next morning, Amir, back from London, suggested a horse ride. Tess had not done that for a long time and readily agreed.
She got back to her room to dress. A complete riding outfit had already been laid out by Amir’s furtive trolls: an Ashby show coat, riding breeches, show shirt, half chaps boots, riding gloves and a riding hat. Miraculously, everything fit to perfection.
Tess met Amir at the stables. He saw her approaching, walking with assured grace and confidence. She was not a novice at this noble pursuit.
Amir expressed his appreciation. “You look exquisite, my Lady.”
“Thank you, Amir. You are handsome and look like a true equestrian.”
“Actually, I am a true equestrian,” he responded, smiling. “As you see Tess, we keep the horses together in spacious stalls. This prevents them from becoming antisocial and difficult to handle. We employ grooms that regularly exercise the horses and look after their welfare.”
Tess was impressed by the facilities and the quality of the horses. She selected a beautiful white stallion called Achilles and led him out by the bridle. Once outside, the horse snorted, signaling that he would not be an easy animal to handle.
“Are you sure you want to ride Achilles, Tess? He can be difficult at times.”
Tess did not reply; she was busy examining the splendid beast. He had all of the ideal characteristics of a fine Arabian horse: a refined, wedge-shaped head, a broad forehead, large eyes, large nostrils, and a small muzzle. Achilles also had a slight forehead bulge between his eyes that added sinus capacity. The horse also had another breed characteristic: an arched neck with a large, well-set windpipe set on a refined, clean throatlatch, allowing flexibility in the bridle and room for the windpipe. As a well-bred Arabian, the horse had deep, well-angled hips and a well laid-back shoulder.
“This horse is truly magnificent, Amir.” Tess kept stroking the head and neck of the noble beast. Achilles snorted and shook his head again, but Tess continued to touch him to make him comfortable with her presence. She did not attempt to mount him until she felt they were properly acquainted. She patiently maintained contact with him until the horse calmed down.
Tess put her cheek on the horse’s neck and gave him a final caress on his snout. “You must make love to a horse before you mount him.”
Amir was almost shocked by her statement, so subject to interpretation. ‘She is an immensely capable woman full of surprises; nothing about her is ordinary. My heart is bursting with desire.’ His Cambridge education sometimes influenced him to use old fashioned Victorian phases to express thoughts of love and lust.
Tess got on the saddle. “A noble beast does not let just anyone ride him; he needs to develop confidence that the rider understands and appreciates him.”
Amir mounted a beautiful black horse and joined Tess at a trot.
“I was trained to do dressage,” Tess shared. “I learned how to develop a horse’s flexibility and responsiveness. This makes the horse stronger and more pleasant to ride. I always competed against myself first and against others taking the test. We all pursued the goal in the competition, which is always to improve on our own score.”
They reached an open field. Tess threw a challenge at Amir. “I’ll race you to that large tree over there.”
“As you wish, my lady.” He tipped his hat and slapped the horse’s haunches. They both started racing at the same time and careened through the meadow as fast as their horses could go. Amir was a superb rider. He had horses in his blood and he rode with remarkable expertise, like an ancient warrior. The animals were truly magnificent, elatedly racing through the countryside. Amir and Tess accelerated as if they were mounted dragoons charging against the enemy’s cannons. He reached the tree first by mere seconds.
They dismounted, and sat under the tree catching their breath.
“Congratulations, Amir. I am impressed that you didn’t let me win. I would have known if you did, and I would not have liked it.”
“You ride beautifully, Tess. I suspect that next time the warrior in you will find a way to win.”
“I really mean it, Amir. You are a marvelous rider. I usually don’t lose a horse race.”
“I wonder why I am not surprised.”
The looked into each other eyes with a renewed sense of respect for each other’s abilities. Amir turned toward her, touched her chin and put his lips on hers. Tess felt a jolt in her body; it was not rejection, but desire. She opened her lips. Amir kissed her passionately, moving his hands to her waist, savoring the magic of two bodies coming close.
Tess stood up, shaken. “Amir, we can’t do this. Let’s go back.”
They mounted their horses and returned to the stables without saying a word. Riding behind Tess, Amir smiled.