You are here: Products Tempting the Governess by Vivienne Westlake 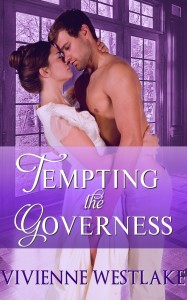 Tempting the Governess by Vivienne Westlake

Never fall in love with your employer. Any respectable governess knew the cardinal rule. Christine Aubrey prided herself on her devotion to her charges, never suspecting that one day a former pupil would tempt her to break every rule in the book.

Theodore Blake was a “good boy” who grew up into a responsible man. Shouldering the burden of raising his sister’s children and managing his older brother’s affairs, Teddy has always done the right thing. But when his former governess returns to Birchwood, all he can think about is how good it would be to be bad.

Vivienne is an active member of Romance Writers of America, Romance Divas, Indie Romance Ink, and the I Love Historical Romance group on facebook.

Then I thought about what might happen if a young man had always fancied his governess, knowing that nothing could ever come of it, due to the difference in their station. What if that man were to see her again, when both were adults and free to indulge in a mutual attraction?

Whispering, so no passersby would hear, he asked, “Would you return here tonight? We could converse privately once the household is abed.”
“I shouldn’t.”
“No, you should not. Will you come anyway?”
Christine closed her eyes and sighed. “It is inappropriate.”
“That is not an answer, Miss Aubrey.”
“I know my place, Mr. Blake. It is with the children. I have indulged this need for…uh…communion twice today. If you desire more conviviality, perhaps you should make acquaintance with more of your neighbors, sir.”
“Does this mean you will not come?”
“I—hmm—not exactly.”
While he would not force her into intimacy, he would not let her evade him with vague responses. If she did not want him, she would have to say so.
“Then let me ask you again. Will you meet with me?”
She said nothing. With her downcast gaze, he could only admire the dark tresses of her hair, which were braided and pinned. Thin, loose curls framed her face.
Had he misread her? Perhaps his own desire was so strong that he only saw what he wanted to see. Maybe Christine and Mother were correct. Perhaps he did need to expand his circle of friends.
Her gaze lifted to his and delicate pink lips parted as she watched him. Did the reddening of her cheeks indicate embarrassment or desire? Instinct told him Christine felt the same connection he did.
Glancing at the door to make sure no servants were looking in, he reached out and touched her cheek. When she shivered, he skimmed the back of his knuckles along the edge of her jaw.
He loved touching her, feeling his bare skin against hers. In this brief moment, all barriers between them dissipated to nothing but air. There was no yearning for what could be, no obsession with what had been. There was only the present, only the sensual caress between him and the woman he desired.
Her chest rose and fell in shallow breaths. He watched as gooseflesh formed on her skin where he’d touched her.
If she had no interest in him, surely she would reprimand him—as she’d done so many times in his youth.
Could she be as conflicted as he was? Maybe she was afraid to say yes, afraid to upset the balance of roles in the household.
Keeping his voice low, he said, “I am beginning to think that the reason you have not told me no is because you cannot tell me no.”
“That is preposterous.” Her gaze did not meet his.
Why won’t you look at me, Christine? Tell me what it is you want. Do you want me as I want you?
“Then say no. Make me believe you have no interest in further association with me. Tell me that you do not find me as fascinating as I find you.”