You are here: Products Temper: Deference by Lila Mina 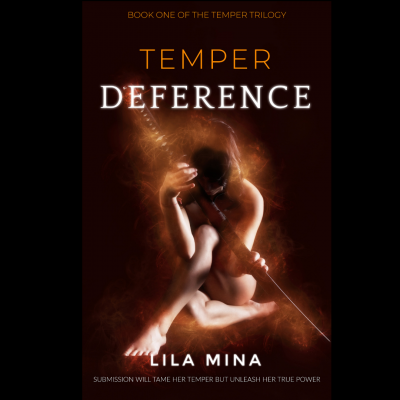 Short-tempered Lana Martin is a workaholic consultant based in Tokyo. Not one to turn down a challenge, she accepts the indecent proposal of her abrasive martial arts’ instructor to become his submissive in a dynamic that tests her resilience.

Spreading like wildfire, their affair lights up another blaze, this time between Lana and Honda’s wife, the sophisticated socialite Yuki. Fearless, Lana embraces what her two masters offer her.

Yet, unbeknown to her, their powerful desire rouses dark powers who waited for decades to claim their prizes. Lana must confront the enemy eating her from within, while pulling back Honda from the edge of madness. Yuki’s unwavering strength keeps them sane – but for how long?

DEFERENCE is Book #1 of the TEMPER trilogy. DREAD and DELIVERANCE will be released in 2019.

An avid reader of thrillers, science-fiction, horror and romance, I have been writing for nearly 25 years. Lila Mina is one of my pen names.

I am a firm believer in cross-genre literature. Life is too complex, too rich and surprising to limit stories to one genre only. I love blending genres to create powerful characters, emotional plots and exciting stories that hopefully will stay a long time with my readers. My stories feature multiracial couples and sometimes menage who come together, bound by love and passion, to fight against forces bent on taking them apart.

I live in Japan. The rich and beautiful traditions, the amazing nature and the long history of this country are a constant source of creative inspiration.

“Yuki san, come closer,” Honda ordered. “Help me remove my clothes. Lana san, stand up, take off your dress and free your hair.”

Lana hesitated for a few heartbeats. Here we go, on the next level. So far, so good. Oh, should I go with a striptease?

The fiery intensity shining in Yuki’s eyes told her that she wouldn’t mind the show. But the controlled, stern gaze of Honda, along with his frown, made her doubt his appreciation of lighter games. Right. Training. Better wait a bit before going with the call-girl act.

With controlled, calm moves that didn’t reflect her mounting excitement, she unclasped her complicated hairpins to let her wavy hair flow on her shoulders. Then she unzipped her dress and removed her tights and black underwear. Doing it in front of Yuki brought no shame, no embarrassment.

Meanwhile, eyes downcast, Yuki peeled away with delicate, yet precise gestures the complex layers of her husband’s clothing. Honda watched each move with rapt concentration. It was not an easy task: first the haori, then the montsuki and the nagajuban–the long under kimono protecting the more precious outer garment from any contact with the skin–and finally the hakama pants. All the clothes had to be folded neatly, following particular rules.

Long minutes went by, in complete silence, adding to Lana’s increasing frustration. She stood in front of them, naked, and for all that she knew, almost forgotten. Yuki’s perfect choreography hypnotized her, and she couldn’t tear her eyes away.

Seeing her so subdued, Lana wondered if Yuki was being punished for disobeying him earlier. Her slender fingers brushed now and then her husband’s exposed skin, and each time she made contact, he couldn’t help a shiver. They are so much into each other… why am I even here?

Her train of thought derailed when she faced once again Honda's large and powerful chest and enticing belly. Her breath caught, and she dug her nails hard in her palms.

“Good memories, little mudansha?” Honda smirked, breaking the heavy silence that had settled in the room. “Why don't you refresh mine? Yuki san, stay here. You may watch but do not touch yourself, understood?”

Honda grasped Lana's hips and brought her with him as he reclined on his back. She ended up straddling him. It was a new position for them, but she didn’t assume she called the shots. This gave him a perfect view of her body.

“I do remember there was something in particular you enjoyed doing to me…” he growled, his own arousal plain and throbbing against her nether regions.

Lana bit her lip. She decided to take a risk. She avoided his erect member. Sliding her hands upwards from his hips, over his chest to his shoulders, she started licking him, beginning from his navel and moving at a leisurely pace, enjoying the texture and taste of his skin.

Tempted to position herself on him and let him slide inside, she decided, however, to go with the second-best thing when it came to sex with the man. As soon as her tongue reached the lower side of his chest, her caressing fingers became claws. She dug her nails on each side of his chest, leaving deep red marks on his smooth brown skin, enjoying the tremors under her fingers, the tightening of his muscles, the shortening of his breath, the low growl building in his chest. His grip on her hips became painful.

Never stopping her lavishing tongue, Lana met his steely stare. Many things shone in her eyes, but not deference. Defiance, challenge, hunger, a reflection of her volatile temper. If she had to become addicted to this man, so be it. If she had to submit to him and see to his needs, she could do it. But somehow, he would have to heed the consequences of rattling the cage of what was buried inside her.

Her mouth moved on to his right nipple, alternating between sucking and gentle bites. She created a contrast between the softness of her mouth and the pain caused by her nails which kept on digging, drawing blood now. But even as Honda enjoyed her ministrations, he wasn’t one to remain idle. His right hand left her hip to part her cheeks. A finger pressed against her rosebud, then moved lower to collect some of her flowing juices to bring them back where he wanted to explore next.

Reacting to the burning pressure, she raised her hips, encouraging him. She would be open, inviting; this was what she wanted. She groaned against his chest when the invading digit pushed further in; one, then two knuckles slid inside. Her body heat rose and perspiration broke on her back and chest, making her skin glide against his. Leaving his nipples alone, a new climax building up, she decided it was time for some aftercare.

Her tongue found the red tracks on his left side and cleaned up the droplets of blood pouring from the wounds. She welcomed the iron taste and moaned at the decadent pleasure blooming inside her chest. Honda’s response was quick: with a grunt, he inserted a second finger that went in easily. Lana melted, her juices flowing out of her pulsating pussy.

She switched sides and applied the same treatment on his right side. His strong and rapid heartbeat and his solid grip on her hip told her all she needed to know about his rising tension. Lana didn’t try to repress her sighs and cries of pleasure. But just as she was about to reach her peak, everything stopped: Honda took his fingers out and pulled on her hair.

“Not too fast, little mudansha,” he grunted, his eyes hooded. “I will have my pleasure first, do you understand?”

“Yes, goshujin sama,” she replied, accepting the challenge; still, she pouted a little in frustration and licked her blood-tainted lips without thinking.

This seemed to be too tempting: he pulled her up by her neck and crashed his mouth on hers, kissing her hard before releasing her. In one fluid movement, he brought her on her back and found himself on top again. The next second, he was inside her pussy in one swift move, his balls slapping her ass. Her breath left her, and she bit his shoulder hard to stifle her scream. Even though she was wet and relaxed, he was large and long.

As Honda began pounding her without mercy, she dug her nails in his shoulder blades, relishing his hard body and being powerless under him. It became increasingly difficult to control herself and tears of frustration spilled on her cheeks. She bit him even harder to refrain from begging for release, but also to get back at him. The blood on the tip of her tongue mingled with his sweat and the taste of his skin, more intoxicating than any hard liquor. Glancing up, she saw hints of passion and arousal cracking through his stoic mask.

To her mounting frustration, he wasn’t on the edge, yet. She clenched her jaw and shut her eyes, attempting to keep her climax under a tight lid, but to her despair, she was losing ground in this battle of wills, and knew she was about to come. Finally, after what seemed to be an eternity, he tensed and emptied himself with a guttural growl.

Relief washed over her. She let herself go, arching her back and screaming out loud, her body wracked by shattering earthquakes. Honda held her tight until her body stopped shaking. Then he sat back in seiza and turned to Yuki who had remained by their side without moving or making a sound.

“Yuki san, you may enjoy her now,” he told his wife, voice gruffer than usual. Yuki took a deep but somewhat shaky breath. The level of self-control she had to exercise was off the charts. Yuki bowed until her head touched her folded hands on the floor.

“Thank you, goshujin sama,” she replied.

Lana lay on her back, still limp from her powerful orgasm. Yuki approached her and their eyes locked; neither of them spoke. The looming presence of Honda couldn’t be denied but now, it was supposed to be about the two of them. A whole new story.

Yuki pulled on her purple sash and let her yukata fall from her slender shoulders, revealing round and firm breasts with long and erect brown nipples. Her waist was thin, and her flat stomach revealed chiseled abs.
Lana had never been attracted to a woman before. Still, their previous flirting and current high state of arousal, enhanced by the power play already established between them, easily pushed open those new doors. Lust coursed in her blood and she felt adventurous, but it was up to Yuki to dictate the pace and design of this dance.

Be the first to review “Temper: Deference by Lila Mina” Cancel reply