You are here: Products Teasing Her SEAL by Anne Marsh 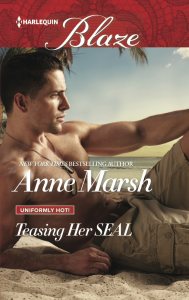 Teasing Her SEAL by Anne Marsh

Objective: Stay on mission. And out of her bed.

Surgeon Laney Parker is on her honeymoon. Alone. Without her cheating fiancé, she’s enjoying her nonrefundable “vacation” at Fantasy Island, an exotic resort filled with lush greenery, white beaches and staff who apparently grant every sexual request. Including an unbearably hot massage therapist whose touch turns Laney to molten lava…

Somebody gave me a particularly lovely birthday present decorated with pink ribbons… and it seemed a shame to waste the ribbons!

GRAY ABSOLUTELY WANTED to believe that she’d picked him. The reasons didn’t matter so much, although he couldn’t be a gentleman if his life depended on it. Laney Parker drove him crazy. From her methodical, let’s-schedule-everything-including-sex approach to life to the way she stared at him as if he was the most mouthwatering brownie on the plate and she planned on having him. Now. Maybe he drove her a little bit crazy, too.
As he followed her inside his room, he realized something else. Laney dressed up for date night drove him more than a little crazy. His awareness of her was a ten on the Richter scale, her sassy sundress begging to be stripped off as she strolled into his room with a sexy roll of her hips. Giving in to temptation, he ran his fingers down the exposed line of her spine. Her dress dipped almost to her waist in the back, a clear hint that she wore no bra. The only thing between him and all her pretty, sun-kissed skin was a handful of cotton.
He pulled her back against him and wrapped one arm around her waist. With his other hand, he tilted her chin up and kissed her. A hard, demanding kiss because if she wasn’t ready for this, for him, he needed to know. For her, he’d slow things down, kiss her until he got it right. He bit her lower lip, catching the plump flesh between his teeth. She tasted like raspberries, pink and tart where she’d slicked some sort of gloss over her lips. He licked her once, twice, then swept inside her mouth when she gasped.
But she pressed back against him, her tongue flirting with his, and when he increased the pressure of his mouth, she moaned. She moved her hands, too, stroking his arms, petting his thighs, as if she couldn’t get enough of him. And then she drew back.
“Wait,” she said.
Crap. He’d scared her. “Laney—”
She wriggled around, turning in his hold until she faced him. “So much better,” she sighed, tipping her head back. “Carry on.”
She was right.
He backed her toward the bed, suddenly grateful for the room’s small size. Five steps and her knees hit the mattress. The room’s lack of romantic extravagance was a plus. Hell, the place was downright sterile. As a resort “employee,” he merited four walls, one door, one window. He also had a twin bed, a set of plain white sheets and a navy blue comforter, none of which he’d put to much use because he’d spent most of his downtime in the SEAL camp. Frankly, the difference between this room and Laney’s bungalow was the difference between, say, Siberia and Fiji. It probably mirrored the differences between the two of them, as well.
“Can we have sex now? Please?” She tugged at his T-shirt.
“I want you to try something for me first.”
“What?”
Reaching into his pocket, he pulled out a pair of silk ties. Usually, he would have used whatever was handy—a cord, a length of rope, his belt. But for her, he’d wanted something special and one of a kind, because she was all he could think about. Thank God none of his team had spotted him going into the hotel gift shop where he’d picked out a pair of pink silk ties while the saleslady smirked at him from behind the counter. But it had been worth the small amount of humiliation on his part. The fabric was soft and wouldn’t burn her skin. He’d also be able to free her easily if she panicked.
“I want to tie you up.”
She made a sound, her face flushing. But she didn’t take her gaze off the ties in his hand. Then she looked up at him, her eyes glazed with a sweet, lush need. “What do I do?”
He set the ties down on the bed and then reached for the strings around her neck holding her dress together. One good tug and they parted, just like he’d imagined. The cotton slipped to her waist when she wiggled. She liked what she was doing, or maybe she just liked turning him on, because her nipples were tight, her breasts flushed.
“Look at these waiting for me.” He cupped her breasts, rubbing his thumbs over the hard tips.
The dress hit the floor.
Laney hooked her thumbs in the waistband of her panties. She must have toed off her sandals because that scrap of black lace was all she wore. And, Jesus, she wore it well. The wicked black vee barely skimmed her mound. She was all shadowy curves and sweet, decadent temptation in the dark room.
“Leave the panties. Kneel on the bed and put your hands on the headboard.”
She hesitated. “I love these panties.”
So did he.