You are here: Products Teaching Mia by M.C. Roman 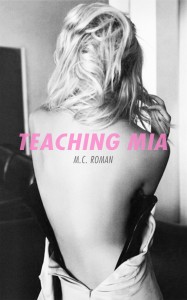 Fed up with her disheartening life in New York City, Mia takes a gamble and embarks on an invigorating journey abroad to business school in Spain.

When Mia Fuentes moves to Spain for graduate school, desperately trying to leave her past behind, the last thing she ever imagined was getting involved with Leo Durant, the hottest and most sought after guy on campus.

Leo is sexy, confident, and has the ultimate bad boy reputation. Something about him keeps pulling her in, when she knows she should be staying far away in the secluded world she has built for herself. Will she be able to overcome her fears and inner struggles that have brought her here? Or will Leo be able to teach her something about love and that not everything in life happens the way we expect?

Contemporary, multicultural, and deeply moving, this is the story of a young woman’s trials and tribulations of leaving everything behind and trying to create a new life for herself in a foreign country. It is a relentless journey of self-exploration, healing, and maturity, with a lot of romance, wit and humor.

Teaching Mia is M.C.’s debut novel after many years of interest in creative writing. Book 2 in the series, Stealing Emma, is currently in progress and features the story of Leo’s older brother Max and his hot pursuit of a love interest who just so happens to be already taken. Spanish Editions of the Nights in Madrid Series are coming soon!

I was inspired to write Teaching Mia after I graduated from business school in Spain. My experience during my time there was so rich and intense, it gave me plenty of source material to work with. Somehow I started imagining what it would be like for a girl to go through the same experience, but by herself and completely alone. That’s when the back story came to me of a wounded girl who was fleeing her past and trying to make a better life for herself in a foreign country. It just seemed like the perfect scenario for someone who had a lot of obstacles in front of them and presented a lot of challenges to struggle through. And of course, a romantic hero who would eventually save her from it all!

Case of the Monday’s
Monday morning. Why did Monday’s always seem so cruel? Mia was back at her usual bus stop, waiting for the forsaken bus that took her to school. Memories of the weekend flashed before her eyes. The concert had been an incredible experience; she couldn’t remember the last time she had just let herself go like that. But that fleeting moment had ended all too abruptly, and the rest of her weekend had been spent in group meetings cramming for all the papers and presentations due for the week.
Was it really necessary to have ten different classes at once? Half the time she felt like she was scrambling just to keep up. And this week was going to be hell. She had something due every day, not to mention two presentations she was already dreading.
Public speaking was definitely not her thing. Despite all the training she had received since she was little, and the classes she had forced herself to take through college, she always felt extremely nervous when she had to give a presentation and couldn’t even sleep the night before. Guess some things never change.
For one of the first times ever, Mia arrived early to class. She had a good five minutes to kill, so decided to go fill her water bottle at the water fountain outside. She could use the extra hydration. She pressed the button and noticed the water pressure was extremely low. Great, this is going to take forever, she thought.
“Hey, beautiful.”
Mia didn’t need to turn around to know who it was. She would now recognize that sexy British accent anywhere.
“Hey, yourself.” She glanced back at Leo and smiled.
“God, I’m so thirsty. Are you almost done there?”
His abrupt question caught Mia a bit off guard. How about, ‘How are you? How was the rest of your weekend?’ she thought.
“Rough night? This thing is taking forever for some reason.” Mia noticed her bottle was about half full.
Leo sighed. “Something like that.” He playfully pushed Mia’s elbow forward and water splashed out from her bottle. “You done yet?” he teased.
“Hey! Stop that,” Mia laughed.
Leo smirked and repeated the same motion from before. “How about now?” More water splashed before her.
“Seriously, you’re not helping the situation Leo.”
“What’s the hold up? C’mon I’m dying over here.”
“I hope you’re really enjoying…oh my God.” Leo had pushed her elbow again, but this time Mia had been already turning around and water splashed all over his face.
Mia instantly burst out in laughter. “Leo, I am so sorry. But that was totally your own fault.”
He tried to brush the remaining drops of water from his face and opened his eyes. “Oh was it? I beg to differ.” An evil grin spread across his face as he snatched the water bottle out of her hands.
“Um…what do you think you’re doing?” But she already knew what was coming and began to back away.
“Getting even, of course.”
She let out a soft shriek and dashed down the hallway. Leo chased after her and was just a few paces behind her. “Don’t think you’re getting out of this so easily, Mia.”
She scrambled behind other students, trying to stay clear of his path. She caught the looks of several people and couldn’t help but laugh at the situation. They must have thought she was losing her mind.
“Can’t we just talk about this like adults?” Mia yelled before entering an empty study room.
“No way.” They started to circle around the conference table. She tried to bluff her direction out of the room, but he was too quick. “Face it Mia, you’re stuck with me.”
“Never,” she chuckled. At that moment, Leo managed to grab a hold of her and playfully pinned her against the wall.
“Now…I think there was something you wanted to say to me.” He dramatically took a long sip out of the water bottle and then held it above her head in a threatening gesture.
“Please, don’t do it!”
“Wrong answer,” Leo chuckled. “Try again.” He began tipping the bottle over this time.
“No lo hagas, Leo,” she tried pleading again.
“You just said the same thing. It’s going to take a lot more convincing than that sweet little Mexican accent of yours,” he challenged.
Out of all things, an episode from Seinfeld came to Mia’s mind. Something about Kramer repeating a mantra that would keep him calm under stress. She lifted up her hands and looked up to the sky. “Serenity…Serenity Now!”
Leo burst out laughing and dropped the water bottle to his side. “Are you serious? God Mia, you’re so fucking cute.”
He leaned in closer and she could feel the weight of his body over her. He touched his forehead to hers and held the side of her face with his free hand. Her vision dropped to his mouth and suddenly all she could think about was what it would be like to kiss him. Surely he was a good kisser…no, an incredible one. He had to be. If his simple touch was any indication of what it would be like, then she was in deep trouble.
Her lips parted involuntarily and all of a sudden he was a millimeter away. Oh, no. This shouldn’t be happening. She shouldn’t have let her thoughts travel there. She was just beginning to inhale his scent, when he stepped back all of a sudden.
“I’m sorry, Mia. I…should go.” His words were barely a whisper.
She felt her cheeks flush and looked down to contain her embarrassment. When she looked up again he was out of sight. She sighed painfully and checked her watch. 8:59am. Since when did things like that happen so early? On a Monday, no less. Manic Monday. Yup, it sure was going to be a hell of a week.

Be the first to review “Teaching Mia by M.C. Roman” Cancel reply