You are here: Products Teacher’s Pet by Veronica Bagby 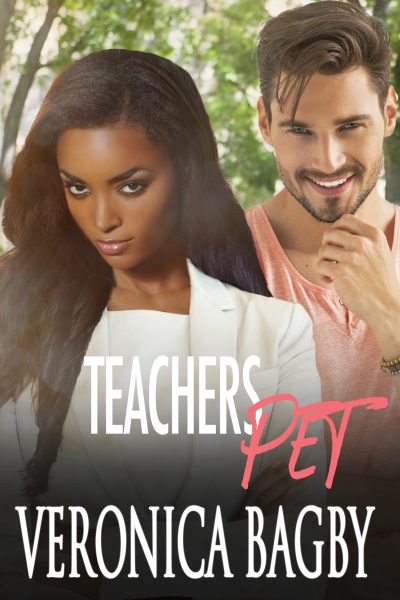 Tagline: Will the reward be worth the regret?

That’s what 41-year-old professor, Genevieve Bailey is asking herself. In a bold move, she’s uprooted herself from the small midwestern town to the Big Apple in search of new challenges. Going from teaching high school to college, shouldn’t be that difficult. Unless the students are anything like the hottie who wouldn’t stop eyeballing her the very first day.

Sloane Maddox is an opportunist. Though he cares little about school, he does enough to get by. Being one of five children, he’s ready to step out on his own, but instead, Sloane wishes to know more about Genevieve’s mind and body. Heavy emphasis on the last one. Genevieve is the first woman who’s managed to interest him this quick.

Genevieve isn’t sure if this risk is worth taking. Should she ignore Sloane and move on or have a rendezvous with the young man to fulfill all her fantasies. Age ain’t nothing but a number, but the years between them and the fact he’s her student pose additional problems. Issues, Genevieve is sure she doesn’t want to deal with.

I write mostly interracial romance with all gender pairings. Soon I'll be writing under another pen, Brooklyn Roberts for FF.

Under this penname, I wanted to see more stories representative of women of color that aren't billionaires or secret babies. *sorry* Nothing against those tropes, but they're way overdone. Also, there aren't many stories with older heroines around my age falling in love. We need more mature women in romance.

On his way up, he nodded to several other upperclassmen. Some of them would be in his classes while others had to make up ones they dropped or failed. Sloane considered himself lucky with his 2.5 grade point average. No, it wasn’t stellar, but at least he had nothing to retake.
Once he took a step on the concrete stairs, he heard someone calling his name.
“Sloane.”
Sloane turned around, waving to Aaron. While doing so, he noticed someone getting out of a cab nearby.
“Hey man, what’s up?”
Sloane didn’t look at Aaron. Instead, he kept focusing on the pretty woman, walking in their direction.
“Holy fuck. And how are you doing?”
“Um, man dude, I know I look good but—"
“Pssh. Not you. I’m talking about that gorgeous woman coming this way.”
Aaron shifted his head and whistled. “Hot damn.”
“Nope. Don’t even think about it. I’m introducing myself first. Maybe she’s a transfer.”
“I dunno who she is, but I’d like to find out.”
Sloane nodded, still staring at the woman’s curvy frame. Wearing a gray suit with a pink blouse, she was all kinds of stunning. Caramel skin, gorgeous brown eyes with jet black hair that fell over her shoulders. She wore pearls around her neck and in her ears which to him symbolized class. No student would wear something like that unless they were going for job interviews or career days and it was too early for that. She had to be a professor.
“Jesus,” Aaron muttered.
“Excuse me, gentlemen.” She smiled and kept walking.
“Sure ma’am. Are you a transfer?” Sloane asked because he didn’t want to assume anything.
The lovely woman stopped and shifted around. “No, I’m an instructor.”
Sloane did a mental fist pump in his head. “Oh, and may I ask what class?”
“Psychology. Is that your major?”
Sloane felt the pat on the back from Aaron and he grinned. “I’m not, but if I liked school enough I’d change it just to be in your class.”
She laughed and shook her head. “Mhm, well, I suppose I’ll see you around.” The professor nodded and continued making her way to the entrance. Everyone gawked as if she were a princess and the guys nearest the doors fell all over themselves to open it for her.
“Dang man, I might be changing to psych,” Aaron beamed.
“Dude, you already took it.”
“Yeah, but… I wanna take it again. That gorgeous cuppa caramel latte is worth it.”
Sloane chuckled. “Yeah, she is. I hope she’s in first period, or, in last would be better. Then I can spend the rest of the day fantasizing about her.”
Aaron snickered. “Yeah man. I hear you. Why couldn’t she be here the other years? I mean, damn.”
“I know, but just my luck she’s here teaching now. I need to find out more.”