You are here: Products Tarq by Cass Alexander 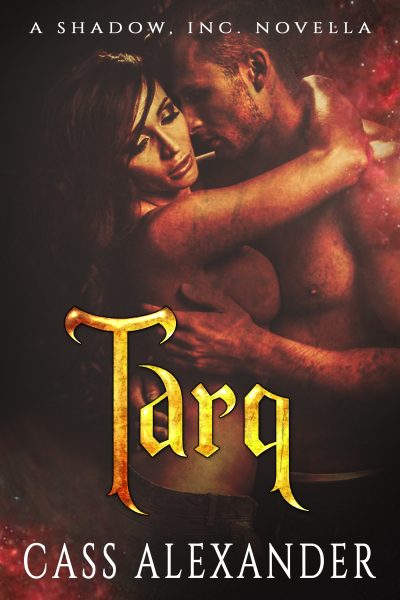 “What do you need, Petal? Tell me and I’ll let you have it,” he promised, ignoring the impulse to dominate her, to tell her what to do and how to please him.

Lily Travelle is a walking wet dream. When Tarq Marcellus was first introduced to her, he lost his mind in want of her delectable body, right in the middle of a business meeting. When he tries to use his power of persuasion to wipe her memory of his major faux pas, it doesn’t work. Humans aren’t supposed to be immune to the powers of immortals.

The next time they cross paths, it’s shortly after he’s been buried deep in a multitude of women, trying to get Lily out of his system. Not one could satisfy his new craving for dark hair and green eyes. This time, Tarq is going to have her in every way possible—and she’s going to love it.

Tarq is the first book of The Shadow, Inc. Series. Each book is a standalone novella centered around the Marcellus Family.

***This quick and dirty read is a 15k-word novella, complete with lots of steam, MFF erotica, a pinch of romance, and a HEA. Recommended for 18+.

Cass Alexander is the pen name of a Southern born and bred public school teacher. Her brother, who insists she address him as, The Prince of Darkness, gave her the nom de plume after warning her that her books' content may scar her sons for life.

Cass’s mission in life is to spread the love and the laughter, goodness knows it’s needed. It’s why she writes fun and naughty books.

I've recently fallen in love with fantasy and paranormal romance. Well, maybe obsession is the better word choice. I've been reading so much of it, I wanted to give it a shot. I mainly write romantic comedies. I am a lover of laughter and it's my go-to coping mechanism. But something about a sexy immortal–lots of sexy immortals–wouldn't leave my brain. I had to put them on paper. Tarq is the first of the Marcellus siblings to find love. Each sibling will get his/her own story. It's been so freakin' fun writing these erotic romance novellas that I pushed another series aside to focus on the Shadow, Inc Series instead.

Quin and Lily jerked their heads towards the sound of the door hitting the wall. It wasn’t slammed, but the person who opened it had been forceful and uncareful.

Lily’s breath hitched at the Adonis striding towards her. Quin was extremely attractive, with sharp lines edging his beautiful face. Almost like a work of art.

The other man was sex on legs. Like Quin, he was tall and broad-shouldered. But where Quin was all smooth and refined, this man was rugged. Stubble covered his face. His dark hair was that perfect mix of messy and styled, just long enough to hold onto while he pounded into her.

She had no idea where the thought came from. Lily did not think or act like this. Not that she didn’t fantasize, but she certainly did not imagine sex with total strangers during business meetings, no matter how hot they were.

His heated gaze met hers and she clenched her legs together. Her panties were becoming soaked. His baby blue eyes were so intense she started to lean towards him.

Lily quickly regained her composure, sitting up in her seat and clasping her hands on the small table. She looked at Quin who was observing the newcomer keenly.

“I thought the meeting was at 3:30?” the other asked, his voice a deep timber fit for a man of his size.

Quin angled his head. “It is. This is—” he started, gesturing towards Lily.

“I could give a shit. Ditch the tart so we can talk before they get here.”

Wow. Nothing kills a lady boner like a man with no manners. She squinted at Quin, thinking he would say something, but his mouth was opening and closing like a fish.

“Excuse me?” she said in her most professional schoolmarm voice.

“No offense, babe,” he sneered. “We’re on a time crunch. You can fuck around with my brother later.”

Brother? This asshole was Tarquin Marcellus? The ultimate lady’s man? She’d heard stories. Admittedly, his looks did live up to the tales, but his personality did not. Did females like being spoken down to like this?

“Uh, Tarq?” Quin tried to get his brother’s attention. He was staring so intently at Lily, Quin was afraid Tarq would do something stupid. Well, more stupid than he already had. He was looking at her like he wanted to eat her alive.

Tarq laughed. This time when he spoke, he let his power come out.

“Finish? Doll face, I haven’t even started with you. Now get your fine ass out of here so I can concentrate on my 3:30 appointment.”

While she glared at him, he took her in. Thick, long, dark brunette hair, the kind a man wants to run his hands through—then pull. Bright green eyes. Pouty pink lips just made to wrap around a cock.

This hot-as-sin female was an architect? There was no fucking way. She couldn’t have been a day over twenty-one.

Sure, her suit was expensive, and the hemline of her pencil skirt was to her knees. Her heels were sensible, not sexy. And now that he was really looking at her, he wasn’t sure if she even had on an ounce of make-up. She was gorgeous. And his damned cock took notice—had hardened at the sound of her voice alone.

Well, well, well. It seemed as though he was going to get his rocks off today, after all. She was so naturally stunning, he might fuck her twice. But being the consummate professional, he would finish the meeting before dragging her to his office. He couldn’t wait.

“Tarq,” Quin cut in, hoping he could salvage the situation, “this is Lilith. Of L.T. Designs.”

Tarq held out his hand. “Lily, it is a pleasure.”

Lily hesitated before reaching for him. “You may call me Lilith. Or Miss Travelle.”

He smirked at her cheekiness.

When their hands met, a tingle shot up her arm, like he’d zapped her with static electricity. If he’d felt it, he gave no indication.

That was it. Lily started packing up her things, closed her laptop way to hard, and wrinkled papers as she stuffed them into her tote. She wanted them to know she was good and pissed.

“Thank you for your time. Quin, if you’d like to reschedule, call my assistant.”

She lifted her bag and started towards the door.

Tarq’s voice, velvety smooth, caressed her skin like a lover. She’d never felt a physical reaction to a voice before. It was as if it was trying to burrow inside her, slowly, sensually. It was … not normal.

Lily was losing her goddamned mind. She needed to get away from him. Her pride, however, wouldn’t let Tarq have the last word. She rounded on him and put her finger in his face.

“I prefer to work with grown-ups. Like Quin. When your gonads drop, give me a call.”

Stupid, stupid broken filter. Lily could not believe she was stooping to name-calling. In under thirty seconds he’d made her a total nut job.

Tarq laughed again and it did things to her insides. Dirty, naughty things. Damn him and the sexy horse he rode in on. She should not be turned on by a douchebag.

“Lily, listen to me,” he told her in a voice an adult would use with a child. It was how he usually got hysterical humans to calm down. He let his power out again, this time he used an extra dose because she’d easily snapped out of his last thrall.

“You will return to the table and forget what I said to upset you. I entered the room shortly after you and we shook hands. It was all very cordial. You’ll retrieve your materials and present as planned. Understood?”

“Yes, see? It’s all okay now. Here, I’ll even escort you to your seat for being such a good girl.”

Tarq reached for her elbow. His focus was on her left arm, which is why he didn’t see her right arm as it flew towards his face. He did, however, feel the impact once her palm came in contact with his cheek and smacked the ever-loving-shit out of him.

Ohmygodohmygodohmygod. She’d struck him. Lily had never hit anyone in her entire life. But something about his patronizing tone and the imaginary stroking she felt on her skin when he spoke to her like that, well, it broke something inside her.

She wanted to scratch and bite, to hurt him. Then she wanted to rip off his clothes and take him on the floor. It was official. She’d lost it.

She stood there, shaking, not knowing if she should run or apologize. He was well within his right to call the cops. Though, Lily couldn’t imagine this was the first time he’d been hit if this was how he treated women.

Tarq raised his hand to rub the sting on the side of his face, in total shock. He’d never been slapped before. Brawls with his own gender had occurred in his past, but never had he tussled with a woman in anger.

He wanted to throw her across his knee and spank her voluptuous ass. It was no less than she deserved. She’d probably like it, angry little kitten that she was. But he had a much bigger problem now. His persuasion didn’t work on her.

It wasn’t possible. No human in the history of humankind had resisted any of Peitho’s progenies. He swiveled his head towards Quin, hoping he had some explanation.

Mother. Fucker. This was bad.

Be the first to review “Tarq by Cass Alexander” Cancel reply