You are here: Products Tam Lin by Heather Osborne 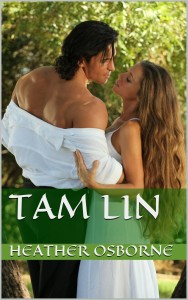 Growing up on Carterhaugh farm, Janet heard the stories about a mysterious man who lurked in the forest, taking tokens from young girls caught there after dark. Little did she know that the stories were true. Can Janet free her lover from the grasps of a lustful Faerie Queen?

Heather is a self published author of historical fiction/romance and erotica. She was born and raised in California, but moved to Scotland in 2009 when she met her future husband, Martin. Heather spends her spare time, when not writing, at the theatre or taking care of her young son, Alex.

After reading this, I knew it would make an amazing erotica. I’ve taken the basic premise of the story and tweaked it to make it more titillating.

“Beware, my son! Never travel in th’ light of the hunter’s moon! The Faerie Queen will be on the prowl for younglings to entrap in her web!”
The youthful lord had dismissed these warnings as stories told to little children with the intention to keep them out of the woods at night. He laughed to himself at the thought of considering heeding them. A man with a score of years behind him did not fear much. He began to hum to himself, surprised when the trees echoed back to him, “Who goes there?” Laughter! He was sure he heard it! Reining the horse to move faster, the trees began to blur. The laughter grew louder until suddenly, before him on the path, there was a woman dressed in a translucent, shimmering gown. He pulled his horse to a halt, nearly missing her and tumbling head first over the horse’s head into the underbrush. The horse shied away from the woman, but she reached out and stroked its nose, whispering softly into its ear. The horse turned and ran back down the path.
Blinking a few times, the lord gained his footing, clear, blue eyes quickly surveying his surroundings, “Who goes there?” He shouted again; hand on the hilt of his sword as he stumbled back to the path. His horse was gone. Cursing softly, he spun around again. The woman stood before him, more beautiful than any woman he had ever beheld. His hand dropped from his sword. He was struck speechless.