You are here: Products Taking The Plunge by Kishan Paul 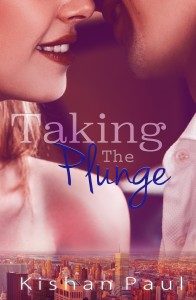 Taking The Plunge by Kishan Paul

Since graduating high school, Eve Cambridge has dropped ten dress sizes, became an RN, and dumped her jerk of a boyfriend—all on her own. So when her high school crush shows up in her life, she does what any normal self–reliant woman would do—pepper spray him.

Since inheriting the family plumbing business, Pete Russo has tried to make the best of a career he never planned for. He’s made his share of mistakes, but he’s worked hard to learn from them. Now that he’s run into Eve, he’s not so sure he isn’t making another one. After all, she did almost blind him.

When logic and emotion don’t agree, which path should they follow?

Mother of two beautiful children, she has been married to her best friend for over 16 years. With the help of supportive family and friends, she balances her family, a thriving counseling practice, and writing without sinking into insanity.

I wrote this book for an anthology about finding love in the most unexpected of places. Around the same time I heard a news report about a plumber. One thing led to another and before I could stop my brain, Taking the Plunge had emerged.

A woman stood about ten feet down the hall. Leaning against the threshold of one of the doors, she stared into a room, oblivious to his presence. Rays of the morning sun bathed her in a hue of gold.
Pete sucked in a breath. She looked like an angel. Tall and lean with just the right amount of curves, she wore light blue scrubs with blue cartoon characters all over her shirt. Her fiery–red hair was tied back in a ponytail with a few loose strands of waves against her cheek.
Evie.
When her full red lips stretched into a smile, the muscles in his face tugged to do the same.
What made her grin like that?
He moved closer for a better view.
A few steps later, the red–headed beauty turned to him. His ability to breathe ceased the minute her blue eyes fixed on him.
Before he could say hello, she raised her arm and sprayed him.
Fuck!
The peppered air felt like smoldering granules of sand shoved into his eyes, mouth and nose—all at once. He dropped the bat, covered his face, coughing and yelling as the burning heat soared through his eyelids and sinuses.
“I’m the plumber. Dan sent me,” he managed to say through his coughing fit.
Keys clattered against the wood floors. “Oh my God! I’m sorry. I’m so sorry.”
He was too busy coughing up his lungs to accept the apology. Hands grabbed his shoulder, steadying him. Unable to open his eyes, he let her guide him through the hall.
When he tried to scrape the fire away from his skin, she pulled his hands back and planted them on a cold surface. “Don’t touch anything, it’ll only make it worse.”
He grunted and clenched the countertop. Tears and snot streamed down his face.
“I’m going to wash it off with water. Okay?”
At this point, Pete wouldn’t have cared if she poured acid on his head as long as it made the inferno stop. Although in the depths of hell, he nodded through his coughing fit and fought the urge to rip his eyelids off his face.
Gentle hands began to wash the sting away, while a soft voice whispered to him calmly. It took a long while for the pain to ebb enough so he could open his eyes without cursing.
Pete sat on the toilet and wiped his face with the towel she handed him. He cleared his sore throat. “Thank you,”
Evie grabbed his towel and dried her hands. “For what? Almost blinding you?”
He eyed the strands of her hair hanging in loose curls against her tanned cheeks and itched to tuck them behind her ears. But after the last twenty minutes of misery, thought better of it.
As if reading his thoughts, her cheeks flushed. She pushed the loose locks out of her face and stared at her toes. Damn she looked cute.
“I’m sorry I sprayed you.”
Pete chuckled. “I showed up unannounced, waving a baseball bat. I think I kind of deserved it.”
When Evie smiled, something fluttered in his stomach.
She bit her lip, obviously to keep from laughing. “Nice bat, by the way.”
How the hell had he not met her until now?
Before he got the chance to tell her just how nice his bat was, his butt started vibrating.
Pete reached into his back pocket, pulled out the cell and looked at the screen. “Your uncle.”
Her eyes widened. “Crap. He thinks I already left. Don’t tell him I’m here.” She turned and headed for the hall.
“Hold up.” Pete grabbed her arm with one hand while hitting the ignore button on the cell with the other. “Have dinner with me and I won’t.” He decided to play his cards and omit the part about how her uncle already knew she was still at the house.
She stared at the wrist he currently possessed. “You know, I still have the pepper spray.”
The cell buzzed a second time. Pete shrugged and kept a grip on her wrist. “I’ll take my chances.”