You are here: Products Taking Chances by Ann Omasta 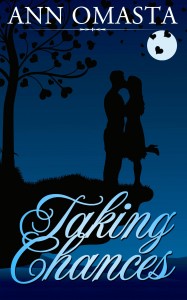 Spice-o-meter Rating: This fun, steamy romance is a solid 7.5, maybe an 8, on a scale of 1 to 10, with 1 being mild (Your Grandma’s diary – let’s hope!) and 10 being Ooh La La, I’m blushing, but I can’t seem to stop turning the pages (The Fifty Shades of Grey Red Room of Pain). If YOU love reading about naughty, complicated love-triangles or enjoy fun, contemporary romance novels with surprising twists along the way, get ready to spend the day reading “Taking Chances.” This fast-paced, exciting story follows the passionate journey of Abigail Brown, a 28-year-old divorcee who has never had an orgasm, much to her chagrin. Despite being self-conscious about what she considers to be her body’s ‘failings’, she has built a terrific life for herself in the quaint, lakeside town of Harbor Shores, Michigan. Abby thinks that she has discovered her ‘happily ever after’ ending when she stumbles upon the perfect man, who shows her the intense sensual bliss that her body is capable of enjoying. Just when you think you have this book all figured out, some unexpected surprises come along and completely shake up Abby’s world. Get your copy of “Taking Chances” now because it’s a great day to relax and enjoy reading a terrific, new book that you won’t want to put down!

10. Did I mention that I hate whipped cream? It makes my stomach churn to look at it, touch it, smell it or even think about it. Great – now I’m thinking about it. Ick!

Ann Omasta has always loved reading, especially romance novels with ‘happily ever after’ endings. After a while, the format started seeming a little too cookie-cutter to her, so she decided to try her hand at writing books that had some surprising twists and turns. She nailed it with her first Contemporary Romance novel duology, “Taking Chances” and “Making Choices.”