You are here: Products Taken In by the Pack: Second Chances by Jazzmyn Wolfe 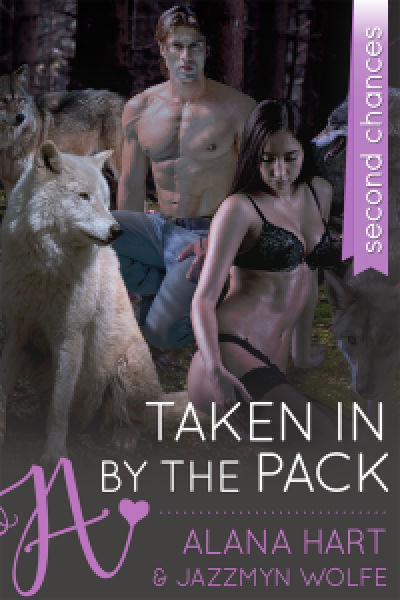 Taken In by the Pack: Second Chances by Jazzmyn Wolfe

Alana Hart has teamed up with Jazzmyn Wolfe for her debut novel, Taken In by the Pack, a steamy paranormal/shifter Romance.

Secrets left her broken. Can the truth make her whole?

In high school, Adalyn Royse thought she’d met her one and only, until he vanished without a word and broke her heart. Now she’s in college and he’s back, more gorgeous than ever, and stalking her around campus. Bryson and his pack of friends are obviously keeping secrets. When Adalyn is shown that the world she lives in — including her past, and even herself — are very different than she thought, will they have a second chance at happily ever after?

She lives in the Deep South of the US, with her loving spouse and two sweet and silly dogs.

I have always enjoyed paranormal/shapeshifter books, and the theme of collaboration for September with the wonderful Alana Hart was ‘Second Chances’.

I moved to one side and held the door open, and Bryson followed close on my heels; even still, in the close quarters of the entryway, he brushed against me as he went past, and it made my breath catch, as tingles radiated outward from the contact. Once we were both inside, I closed the door and locked the deadbolt out of habit. I let my book bag drop next to the door, since there was something much more immediate to deal with than putting it in its usual place. I remained facing the door for a long moment, collecting my thoughts.
I finally turned, and nearly jumped back — not that it would have done me much good, I was almost touching the door behind me as it was — to find Bryson no more than a handful of inches away from me. I looked up into his face, wide-eyed. My breath came more quickly, and an aching knot formed in my belly. I could feel the heat radiating off of him, and my own body seemed to grow hotter to match. Part of me wanted to run in terror, and part of me wanted to throw myself on this magnificent man who would so obviously welcome it.
He lifted his arms, clearly with the intent of wrapping them around me, drawing me to him in an embrace. In a snap decision, I ducked a bit and slipped past his arm before it encircled me. I wasn’t quite ready for that, not just yet at least. I wanted my head to stay relatively clear for at least a few minutes. There would be plenty of time to get lost in the moment with him, after I got some answers and if I decided that was what I wanted after I had those answers.
“Uhm. I need to — to go change. I was just at the gym.” I plucked at the hem of my shirt, as if that would somehow clarify my meaning. Of course, I hadn’t worn these clothes there, and I’d showered before I put them back on, but there was no need to tell him that. I just needed an excuse to put some distance between us for a minute.
He frowned slightly, and there was a deep hurt in his eyes. Was that a look of rejection? Did he think that was an answer on my part, a refusal? He pushed the hurt aside quickly though, his face crinkling up in a mockingly lecherous grin. “I could come help you change if you want?”
I rolled my eyes, giving him an exasperated look. “I think I can manage to change my clothes by myself. I have been managing for quite a few years now on my own, anyway. And besides, if you tried to help, I don’t think the new clothes would be likely to make it on any time soon.” I began to step backwards slowly as I spoke, putting more space between us as I headed toward my bedroom.
“Well, sure, that’s the point.” He grinned more broadly. Damn, he’s sexy when he grins like that, with his eyes all lit up and— I stopped that line of thinking in its tracks. Not. Helpful.
I scrunched my face up at him, kind of like an annoyed version of a duck-face. “Oh, you’re impossible. Just have a seat,” I waved a hand to indicate my threadbare couch, “and I’ll be back out in a couple of minutes, okay?”
He sighed, shoulders slumping somewhat, but nodded. “Alright, alright. Just don’t take too long, yeah?” How could a young man so obviously used to being in charge, to being powerful in every way that mattered, look so incredibly pitiful at such a minor disappointment?
I bit my lip, and just nodded shallowly in response, before turning to flee into the sanctuary of my bedroom, closing the door firmly.

Be the first to review “Taken In by the Pack: Second Chances by Jazzmyn Wolfe” Cancel reply