You are here: Products Taken by the Vikings by Isabel Dare 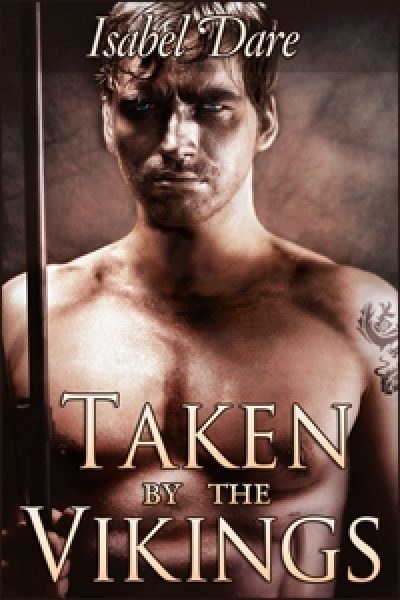 Taken by the Vikings by Isabel Dare

Desperate to protect his village, young Edric rams his small fishing boat into a Viking ship, and ends up captured by the Viking raiders.

When Viking leader Thorvald puts a thrall collar around Edric’s neck, Edric offers to pleasure the huge Viking in exchange for his freedom. But the other Vikings demand their share of their new thrall, and soon Edric finds himself on his knees, servicing the entire crew in a vicious Viking free-for-all…

Edric took a deep, shuddering breath, and sunk to his knees in front of the big man, looking up at him in hope and fear.
Thorvald looked down, frowning. “What’s this?”
“I…would pleasure you,” Edric said, trying hard to keep his voice firm.
These men admired courage, not weakness. And this…it was either the bravest thing he had ever done, or the craziest. “If you give me my freedom in exchange.”
There was a pause. Edric didn’t look away from Thorvald’s fierce, icy blue eyes, but he sensed the other men listening intently all around them.
“I see,” Thorvald said, and that same grim smile curved his lips. “You think there is a bargain to be made, here, do you? You think you’re at the market, selling fish?”
Edric didn’t know how to respond. “No, I -”
“And do you have experience pleasuring men?”
Thorvald’s fierce eyes watched him grimly, and Edric knew he could not lie to this man. Not if he wished to live.
“No,” he said quietly. “I do not.” He had heard some stories, boasts, filthy tales told at night, but that was all.
“Or women?”
Edric swallowed, feeling the blush rise to his cheeks. “No.”
There was a hush of indrawn breath from the men all around them.