You are here: Products Swingers Inn by Jake Ellwood 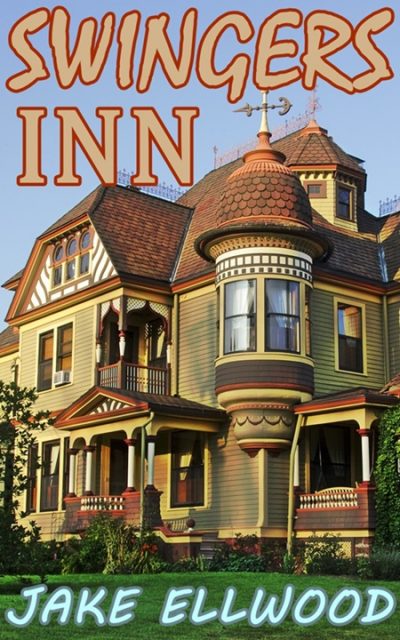 Kelly was willing to try anything to put the spark back into her marriage. Her hairdresser suggested a romantic getaway at a secluded bed and breakfast. Hoping that it would be the answer to her romantic malaise, she booked a week stay. It turned out to be the answer. Unfortunately, it was the answer to the wrong question.

Kelly didn’t tell her husband just how secluded the inn was, knowing he would never have agreed to go if he knew. The problem was that she didn’t know it was an inn for swingers and they would be stuck there for at least four days with no way to leave. They will have to reassess their relationship and even their outlook on life before they can go home.

I live on a boat in a marina with my wife. We enjoy the ambience, friendliness, and leisurely lifestyle living afloat. It gives me time to thoroughly contemplate my stories and work out the plot details and emotions of my characters.

I write with the intention of always having my characters react to situations in a realistic manner. Many of my stories have a basis in a real-life event, even if they are fictionalized. I want my readers to identify with my characters motivations even if they would never find themselves in a similar situation.

My characters almost always find themselves in a strange situation not of their making. They usually have to work through a new experience or dilemma they had never faced previously. I like to show that they learn and grow from the experience and that they become better from having gone through it.

There is an airbnb just like the Inn I have described in the story. It's not in Savannah, and it is accessible by car, but the rules are the same. It is almost always fully booked.

They had made a complete circle of the room and were back to where they had started at the entrance door. Sofia released Kelly's arm and plucked the 'Do Not Disturb' sign from the inside doorknob. “If you're playing, just hang this on the doorknob and nobody will bother you. But, I know how new places can be a little intimidating, so if you are just a little shy, hang this side on the knob.” She turned the card around to show it read 'Please Disturb'. “It'll get someone's attention.” She smiled wryly. “That's about everything. The weather is really nice today so happy hour is out on the patio at five o'clock. Feel free to get in the hot tub anytime. Dinner is at six, then party in the club afterward. See you then.” She handed the doorknob card to Kelly then turned and exited the room.

Kelly and Jim looked at each other for several seconds. “What the hell was that all about?” Jim spoke first.

“I don't know,” Kelly confessed, being just as confused as Jim. “What did she mean by no playing in the hot tub.”

“I guess that means your water polo game is out of the question.”

Kelly giggled then hugged him lovingly. “Whatever she meant, let's get changed and go to happy hour. I could use a drink to get the weekend started out right.”