You are here: Products Sweet Revenge : A Scandalous Proposal From The Rogue Billionaire by Serene Mccarthy 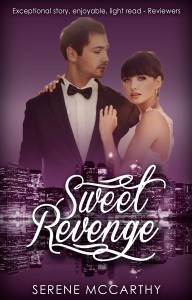 Sweet Revenge : A Scandalous Proposal From The Rogue Billionaire by Serene Mccarthy

Temptation. Seduction. Revenge. Beautiful Kaitlyn Monroe never thought that her job as a personal shopper would land her a chance to bump into a dashing billionaire – Roy Hearst. Entirely fascinated by her beauty and intelligence, he lures the angelic, young lady into temptation by offering her a dare-devil proposal – to play the role of a social escort by his side. He just needs a date that he can string along to the socialite functions he is invited to attend. Believing in the pure innocence of the arrangement, Kaitlyn agrees to the ‘scandalous’ proposal for the sake of securing a better life and earning the money she needs for her university studies. Everything seems to proceed smoothly, until the day she finds herself in love with the charming yet forbidden billionaire bachelor. Love and commitment are words that never appear in the dictionary of Roy Hearst because he is one man who is able to get any woman he wants with a snap of his fingers. Moreover, he does not believe in mixing business with pleasure. Torn between her love for him and her desire to pursue her own dreams, she decides to pick the latter. Some years later, she returns with a burning desire to make the ruthless billionaire pay back for misleading her in his deceptive game of love. Will she succeed in turning the tables on him this time and finally, give him a taste of his own medicine? (NOTE: Will be avail on Barnes and Noble, Kobo, and other sites within the next one to two weeks.)

Serene McCarthy enjoys reading contemporary women’s fiction and historical romances to get some inspiration for her own writings. A true romantic at heart who’s residing in New York together with her family, she loves to dream up new heart-warming, spicy romance comedies, coupled with some sensual details to tickle and amuse her readers. In her spare time, she loves listening to jazz and piano pieces, other than playing the game of Reversi online. As for her exercise regime, badminton tops her list of favorites.

It’s just an inspirational craving I have had for some time.

CHAPTER ONE
Kaitlyn Monroe walked briskly across the road and hurried on to the store. She raised the coffee cup to her lips again and drained the last drops of coffee into her mouth. She tossed the cup into the bin by the pavement and hurried on. She looked at her wristwatch again. Two-thirty p.m. She was so late in returning to her workplace, and she hoped that no one would notice her long absence from work.
She had left one hour earlier for lunch today because her gastric pains were troubling her and making it difficult for her to concentrate on the job. Hence, she had told Ted – her manager – of her need to purchase some medication to treat her gastric pains, and he had been kind enough to let her off for an early lunch and run her errands subsequently.
Lunch, in effect, was supposed to last thirty minutes, but she had bumped into an old classmate – Trevor – as they were both standing in line at the diner, and they had ended up eating lunch together. In the midst of chatting, five minutes had become ten, ten minutes had become fifteen, and before she knew it, they had chatted for an hour. How had time flown so quickly? It had not seemed like an hour, it felt like they had just been talking for ten minutes. How could she have lost herself in the conversation?
She rounded the bend and headed in the direction of Patterson Street. What excuse could she give if her superior questioned her about her tardiness? She was a terrible liar, and almost everyone knew that she stuttered when she was telling a lie. She reminded herself to work on correcting that exasperating weakness of hers.
Growing up, she had often been taught not to lie, but that really did not pay off at this time and age. Not like, it had ever paid off before. Back to deciding what lie to tell. Oh, perhaps, she could just tell Ted that she had gotten diarrhea from what she had eaten, yet it would mean ruining the reputation and business of the diner she had patronized.
Everyone knew she loved milk so uttering a blatant lie about her lactose intolerance causing her diarrhea was clearly not an option. And she sure as well could not lie that she had met with an accident. Her legs were still intact and so was her face. Shucks! I would just have to play it cool and stay quiet throughout the entire dressing-down from my superior. She prayed it would end at that. She could not afford to lose this job! Not at this point!
She heard her phone beep and moved her bag to her front to search for the phone. As she rummaged through the bag, she felt herself collide into someone. A man with a medium build and a raw masculine scent, she realized as she looked up in curiosity. Her eyes sighted a deep frown on what would have been the most handsome face she had seen all day. Heck, all week, in actuality. Hardly surprising to her since her line of work made it a regular routine for her to attend to the back and call of handsome men.
Even with the frown marring his excellent facial features, he was still a vision to behold. His penetrating, icy blue eyes met her hazel eyes in a stare that might as well have turned her into a statue. Her eyes drank in the major details of the intriguing hunk with a deep curiosity.
She took in his debonair features and dark crop of hair, apart from what looked like an extremely expensive suit that molded to his body and those shiny black leather shoes he was wearing. He was devilishly handsome, and the aura of confidence he exuded somehow made her knees go weak as she fumbled for the proper words of apology to say to him.
“I am really sorry for getting into your way unintentionally. I was hurrying back to work and did not see you approaching from the opposite direction.”
His tensed features became more relaxed. “It’s alright. You should be a lot more careful next time. After all, not everyone is as forgiving as I am.”
“Right.” She replied with a smirk on her face, looking oddly amused by his exaggerated claim of him being a benevolent gentleman.

Be the first to review “Sweet Revenge : A Scandalous Proposal From The Rogue Billionaire by Serene Mccarthy” Cancel reply