You are here: Products Sweet Dreams by Alan James 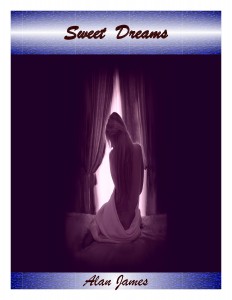 This is the first installment of a short trilogy series.

Jessica, a young and accomplished artist is being haunted by a recurring dream of seduction and horror. As her dreams begin to appear to her while she is awake, her life starts to unravel, and she begins to question her sanity. As she starts to lose her grip on reality, she discovers that there may be more to these dreams, than just fantasy. She is presented with an opportunity to find out the truth behind her seductive night terrors. Jessica seizes the opportunity without hesitation, finally ready to uncover the mystery of her horrific yet sweet dreams.

This is a short book, at around 11,000 words or so, and is good for anyone who likes a quick read, with cliffhangers. It is full of eerie suspense and seduction.

I like dark fantasy concepts. I believe that the mysteries of the dark and supernatural can be as seductive as a beautiful woman or handsome charming man. I like to write about the seductive aspect of the supernatural, and how it reflects on our carnal natures.

I started the idea as a short, but decided to expand upon it and make it a series. I enjoyed the idea of, what if our dreams turned out to be more than that, and how would we react when we were shown the truth.