You are here: Products Sweet: A Dark Love Story by R.E. Saxton 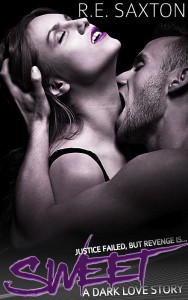 This full-length short novel, with no cliffhangers and a happy ending, is just $0.99 for a limited time.

Justice failed, but revenge is sweet…

Six years ago, Declan lost his wife and unborn child to a heinous crime, and the man responsible was let off on a technicality. He’s spent six years planning his revenge, and denied the pleasure of destroying the long-dead murderer, he’s turned his attention to the man’s daughter. She’ll pay for her father’s sins, and revenge will be sweet.

After a lifetime of disappointments, Katriona shouldn’t be surprised when the vacation she’s supposedly won ends up making her a captive to Declan, a man she’s never forgotten—a man now determined to claim her and use her in his twisted pursuit of vengeance. Knowing his intentions, it shouldn’t be difficult to fight him, but with his every touch, and every mark he leaves on her as a sign of his possession, she falls deeper under his spell and into the darkness inside her.

Pleasure is nice, but pain is even sweeter, and love is the ultimate agony…

This novel has content some readers might find objectionable. It is a dark romance with dark themes. If that isn’t your preferred reading material, this probably isn’t the book for you. If you like a possessive, deeply (emotionally) scarred alpha male with revenge on his mind and the dark urge to possess his woman in every way possible, spend some time with Declan. He’s pretty sweet deep down…very deep down.

Before she could think better of it, Kat lifted her hand and slapped him again. She was appalled by the show of violence, because she had never been one to give in to violent impulses. After a lifetime of watching the people around her break into fistfights for the slightest provocation, and of being her father’s punching bag for sixteen years before he got himself killed, and she was sent to foster care, she had always cultivated a peaceful response. All that went out the window with Declan.
His mouth tightened, and one of his hands moved from her cheek to grasp a handful of her black hair. She yelped when he dragged her head back sharply, exposing her throat. “I warned you not to raise your hand to me again.”
She glared up at him. “Are you going to strike me then? It wouldn’t be the first time someone’s punched me.”
His gray eyes darkened, and he radiated anger. “Who dared raise a hand to you?”
She blinked, stunned by his abrupt change. “My father, his brothers, and my first boyfriend. Now you, right?”
“I’m not going to strike you. You’re too lovely, and my father taught me never to hit a woman.”
She started to sag with relief, and he jerked sharply on her hair to compensate, forcing her to maintain her bowed back and exposed neck in her vulnerable posture. A moment later, she cried out when his head bent, and he bit her on the side of her neck. It wasn’t sharp enough to draw blood, but definitely stung.
“Let go of me.” She whimpered when he bit her again with the same intensity before changing the pressure of his mouth to suction, clearly intent on leaving a hickey. “What the hell are you doing?”
“Marking you. I need to see your skin bearing proof of my ownership.” His eyes were glazed with passion, and before she had time to process what he was doing, let alone resist, Declan had pushed her to the ground. He pinned her wrists above her head as she bowed her body and tried to buck him off, seeming to easily ignore her attempts to resist.
Hysteria shot through her, feeding her struggles, while he pressed down on her calmly, just waiting her out. She struggled for several minutes until exhaustion swept over her, and she slumped against the dirt and sparse vegetation underneath her. The fight didn’t drain from her, but the energy to sustain it had for the moment.
“Stop fighting, Kat. Accept you’re mine, and give in gracefully.”
“Fuck you.”
Declan maintained his hold on her hands with one of his, his fingers long enough to wrap around both of her thin wrists and hold her easily, especially since she had worn herself out trying to escape. His other hand went between their bodies, and she stiffened with fright and outrage as she heard his belt clinking when he opened it. The rasp of his zipper was unnaturally loud, and the crashing of the ocean against the rocky beach below should have drowned it out.

Be the first to review “Sweet: A Dark Love Story by R.E. Saxton” Cancel reply