You are here: Products Sun Storm by Marlow Kelly 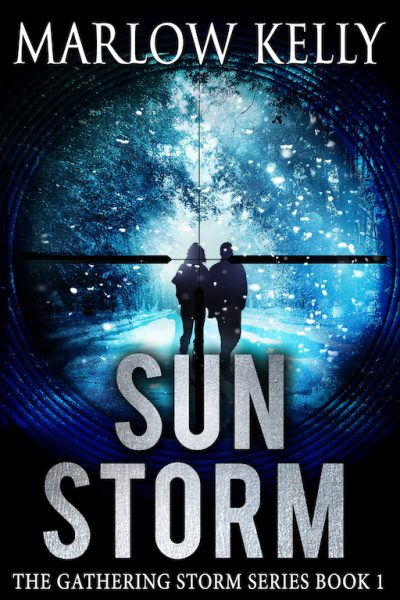 Hunted by a gunman and a corrupt police force… in a blizzard.

In Montana to prove her portable solar panel can solve the world’s energy problems, naïve scientist, Dr. Marie Wilson must first fight to survive and then expose the powerful businessman intent on destroying her life’s work.

Ex-special forces soldier, David Quinn is haunted by the horrors of combat, and yearns to be left alone with his beehives, but agrees to do one last job for his old mentor.

When the scariest man she’s ever met becomes her savior, Marie discovers a heart of gold beats beneath his surly demeanor.

After being thrown out of England for refusing to drink tea, Marlow Kelly made her way to Canada where she found love, a home and a pug named Max. She also discovered her love of storytelling. Encouraged by her husband, children and let’s not forget Max, she started putting her ideas on paper. She enjoys writing suspenseful, fast-pace romance stories that always feature strong women.
Marlow is an award-winning author, a member of the Romance Writers of America and an Amazon bestselling author.

Two ideas converged to inspire Sun Storm.
Years ago, I was tracking a new type of solar panel on the internet. The scientists working on it were having problems getting it to work. Then one day it was gone. I couldn't find it anywhere. That, of course, got my writers brain turning.
I also loved the idea that a good man who was once a homeless kid could be the hero.