You are here: Products Sun & Moon: a contemporary inspirational romance by Hope Franke 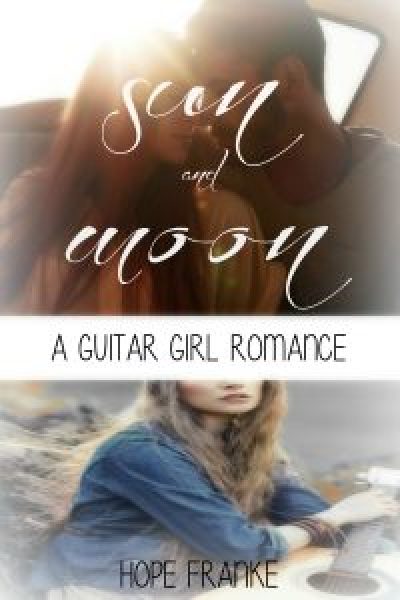 Hope Franke is the inspirational romance author of The Guitar Girl Romance series and other standalone novels. She loves to travel and all the GGR books are set in European places she’s lived in or visited. She writes young adult as Elle Strauss and sci-fi mystery thrillers as Lee Strauss.

My husband is a musician and so the singer-songwriter world is something I’m very familiar with. We also spend half the year in Germany and I wanted to capture what life is like there. Sun & Moon is the first in an inspirational series – A Guitar Girl Romance – that combines these two parts of my life.

Open mic night at the Blue Note Pub.  Katja signed her name on the performer’s list and hoped she’d be called to play. If the manager liked her he might let her book a whole night. It happened sometimes. Not only could she make a hundred euros, but her name would also be on the posters. Katja Stoltz Money and fame. She needed both. The bar wasn’t huge. It had a low, wood-beamed ceiling with wooden floors and long tables that were already occupied, making the space feel even smaller. She shuffled past the other musicians and music lovers, holding her guitar case close to her chest. Her eyes darted around the room, searching for a place to sit. A guy with brown hair shaved short watched her. She’d seen him before, though they’d never spoken, just the kindred nod that happened between musicians as they acknowledged each other’s guitar. He had a peacock tattoo that stretched across his strumming arm, which was draped over a thin girl with spiky blond hair. The guy waved Katja over, shoving down on the bench to make room. Katja pushed loose strands of hair behind her ear and took the offered seat. She flashed him a bright, sincere smile. “Thanks.” “It’s cool. You’re playing tonight?” he asked loudly to cut through the din of conversation and the music pumping in through the speakers hanging from the corners of the room.  “I hope so. You?” The guy shrugged. “Maybe. Rock’s more my thing, but acoustic’s cool, too. I’m Sebastian. This is my girlfriend, Yvonne.” Yvonne forced a smile but didn’t make eye contact. Sebastian introduced the rest of the table, but their names disappeared into the clatter of the room. As each musician was called, Katja’s stomach spun tighter. The artists were good and she applauded appreciatively with the rest of the crowd after each performer. The waiter brought drinks to their table and asked Katja if she’d like to order. She’d love to, but she shook her head no. She couldn’t even spare ten cents. “It’s on me,” Sebastian said, surprising her. “Bring her a beer.” Yvonne glared at him. Sebastian laughed and squeezed her shoulders. “Baby, it’s okay. The chick’s gotta be thirsty, and she’s singing tonight.” Katja mouthed thank you. She was thirsty. She wanted to impress Herr Leduc, the manager, and it would be much harder to do that with a dry throat. He’d been very friendly when she first introduced herself a few weeks ago, welcoming her to his pub with exuberant German laced with a thick French accent.  Finally, Katja’s name was called. She made her way through the crowd, careful not to bang into anyone with her guitar. The lights were bright on the stage, momentarily blinding her. She strapped her guitar over her shoulder and scanned the crowd. She gulped, thinking belatedly that maybe it wasn’t a great idea to be doing her newest song. Her eyes landed on Sebastian and he lifted his beer to her before taking a long drink. “Hello, everyone,” she said while tuning the bottom string of her guitar. “I’m Katja Stoltz and this is a new song.”

Be the first to review “Sun & Moon: a contemporary inspirational romance by Hope Franke” Cancel reply