You are here: Products Summer Tranny by Alcazar 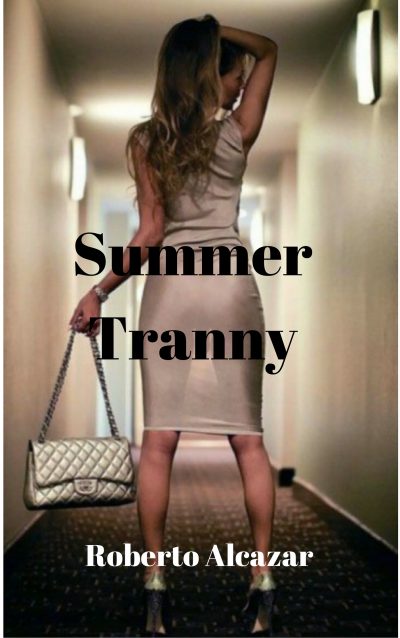 “It is only an exciting game, a role-play for adults. And it is only for tonight”, his stepmother whispers seductively in his ear while she tenderly caresses his young body. And indeed, it is a glorious experience when she turns him into her tranny lover that night, so exciting that he is eager to prolong it. After make-up and deportment lessons, his stepmom takes him out, all made up and glamorous, to shop for underwear and shoes and clothes. Totally unaware that he is getting more and more entangled in a slowly closing web, he enjoys his new shemale identity during those early summer months. Then, one day, the web closes with a snap and he suddenly discovers the dark side of the ‘game’. He has been turned into a full time shemale escort and there is no going back …

The idea behind the story is to show how hard it is for a young boy to conceal his experiments with different sexual orientations and what the consequences may be when found out. In this story, the life of the main character is radically changed and he has to come to terms with it. But with a little bit of help it turns out all right.

when he turned the BMW into the basement garage, he was annoyed to see his stepmother’s Lexus still parked there. Odd, he thought; she should have left hours ago; he should have had the whole house to himself this weekend.
He hurried up the basement stairs and when he opened the door at the top, he was greeted by the smell of a rather strong and heavy perfume that could only be his stepmother’s. The scent became stronger as he went into the living room and it somehow excited him. He wondered why it conjured up visions of a candle-lit bedroom and soft, relaxing music.
He opened the door to the living room and for a moment he stood rooted to the ground in surprise.
His stepmother was sitting on the sofa, backlit by the bright garden windows and she did not look up when he came in. Coming closer, he had a good look at the cover of the magazine she was reading and an icy hand clutched at his heart.
It was ‘Tranny World’.
And he had bought it only yesterday…
Her long, bright-red enamelled fingernails stopped turning the pages and she steadily gazed at him over the top of the magazine. Her flashing eyes stared at him, fixing him rigid like the pitiless eyes of a bird of prey.
Putting the magazine aside, his stepmother got up from the sofa in a single languid movement and he gasped at the sight of the red and black satin basque she was wearing. Its tightly laced body pinched her waist and pushed up her ample breasts that filled its half-cups. Frilly garters held up fine-mesh fishnet stockings with high, black lacy tops that nicely framed her bare crotch. Black patent leather sandals with eight inch heels and platform soles adorned her feet.

Be the first to review “Summer Tranny by Alcazar” Cancel reply