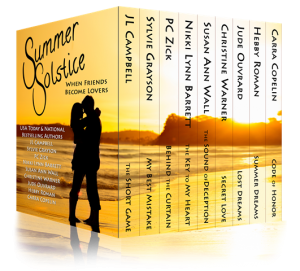 Love comes from the most unexpected places and is sweeter when friends turn into lovers. The summer’s best beach read!

SUMMER SOLSTICE gives you NINE, very different, exciting romances, featuring friends who eventually turn into lovers.! Dive into a tantalizing selection of full-length romances that feature sexy heroes and their women who make the leap from the security of friendship to the heat and passion of new-found love.

Penned by USA Today and best-selling authors, Summer Solstice will have you rooting for characters who dare to reach for love, despite the challenges.

When Garth Chu is injured in a car accident, his long-time golfing buddy, Anna-Lise, discovers feelings she’s never admitted to having, and Garth can’t remember when she went from sister-friend to potential lady-love. A sizzling interlude forces them to choose between being best buddies or making the transition to happy-ever-after.

Jordie was heartbroken when he came home from university to find Jenny had married another man. Now she lives beside him, and he’ll either go crazy or do what he should have done years ago – claim her for his own. Jenny is back in town and she’s angry, her husband cheated, her kids were hurt and she can’t let it go. But when her boss dies and someone comes after her, who will she turn to? Can cousin Jordie help put this picture back together?

P.C. Zick – Behind the Curtain

When Lisa Williams returns to her hometown to star in a reality TV show, not everyone is happy. Friends and family turn against her. Even her buddy Tommy, a reporter assigned to cover the show, can’t accept all that Lisa will do to become a star. Through all the adversity, he discovers he feels more for Lisa than friendship.

Nikki Lynn Barrett – The Key To My Heart

Blaine Grant returns home with secrets and a past she’d like to forget. She’s missed out on so much and those she loves wonder how long she’ll stick around this time. The one person who sees through her facade is longtime friend Randy Hughes. Now that Blaine’s back home, he finally reveals how he’s felt about her all these years.

Bryan Curtis isn’t supposed to want his best friend’s sister but saving a sinking ship would be easier than denying their attraction. When he and Morgan Landry cross the line from friends to lovers, they’ll deceive their friends for just one more night together.

Saranac, Michigan 1955 – Can Lizzie Tarleton and Wayne Whitmore confess their love and then overcome secrets they are hiding in order to get what they each want? Or is their timing for love still off?

When Carter is killed in combat, he leaves behind his heartbroken wife, Avery and his shattered best friend Remy. Naturally these two wounded souls gravitate together, irresistibly drawn by the loss of the one they both loved, as well as their deep friendship with each other. But when that friendship starts to turn into something more, new problems arise. Will Avery be able to move on after losing the love of her life? Will Remy be able to fill the void left by the loss of his best friend? Or will this new chance at love cost them all they have left?

Natalia Colon, who is hurting from a broken engagement, visits her beloved grandmother in New Mexico for the summer. She looks forward to seeing her childhood friend, Esteban Montalvo. Esteban has become a minor league baseball player who has ambitions to make the big league; and with his dark, athletic good looks, she fears he won’t be interested in a bookish school teacher. But Esteban has been secretly in love with her since they were children, although he worries his love isn’t good enough for her. Can these two friends overcome their fears and find true love?

Graeme McAlister’s determined to unearth the truth behind his brother’s implausible suicide but, when he sees his widowed sister-in-law, will he be able to handle the biggest revelation of all?

After the death of her husband, Maggie Benning resolves to establish a successful and independent life for herself and her son, Andy. Can she overcome past hurt and loss of trust to accept a new love in her life?

Carra Copelin – Carra Copelin writes “well-written novels, complete with correct places, weather, and flavor.” . . . from a Native Texan reader. Her books are contemporary and historical romantic suspense about Texans set in Texas. No matter the murder, mystery, or mayhem that may surround or involve the hero and heroine, every story revolves around their romance and family.She is a member of Romance Writers of America and past President of Yellow Rose Romance Writers, plus she regularly contributes to Smart Girls Read Romance and Sweethearts of the West Blogs. She and her hero live in North Central Texas, in the Dallas-Fort Worth Metroplex where they enjoy their family and grandchildren. In addition to writing and researching with her fabulous critique partners, she enjoys playing bridge, crochet, and genealogy.

We are a group of romance writers who thought a fun summer beach read would be a box set featuring characters who start as friends but then turn to lovers. This collection of nine novels comes from bestselling and award-winning romance authors and is inspired by a love of telling romantic tales.