You are here: Products Summer Heat by Melissa Keir 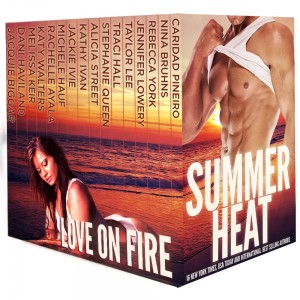 16 All New Contemporary Romances from NY Times, USA Today, and International Bestselling Authors. Guaranteed to make your blood run hot. Passion, steamy nights, excitement, and suspense. Something to suit every reader’s taste. Grab a cool drink (you’ll need it!), find a hammock, and curl up for an unforgettable escape.

Melissa doesn’t believe in down time. She’s always keeping busy. Melissa is a wife and mother, an elementary school teacher, a book reviewer, owner of a publishing company as well as an author. Her home blends two families and is a lot like the Brady Bunch, without Alice- a large grocery bill, tons of dirty dishes and a mound of laundry. She loves to write stories that feature happy endings and is often seen plotting her next story.

As a teacher and avid reader, I write stories that thrill me and make me happy!

Arriving on the scene, the smell of smoke with the tang of gasoline assaulted my lungs. The building was a total loss. It bothered me to see something once so beautiful destroyed.
“Sir, you can’t be here,” the officer I’d assigned to the perimeter yelled.
Turning toward the commotion, I witnessed a tall, dark-haired man storming toward me with violence in his approach. Sizing up the advancing danger, I threw my shoulders back and met the man halfway.
“This is my building. Who are you, and what do you know so far?” His gravel voice caused goose bumps to form on my skin.
“I’m sorry, Mr…?” Up close, the man took my breath away. His features weren’t “pretty boy” beautiful, but striking. Chiseled chin, full lips, slightly curved nose. Must have been broken at one time.
“Pigg, Lucas Pigg. And you are?”
Caught staring at his lips, I almost missed the question. “I’m Lily O’Neill, chief arson investigator. We don’t know much so far. I’ve only begun my investigation. This wasn’t an accident. It was set with gasoline as the accelerant. The smell is noticeable. I have some questions for you. I’d like to meet you in my office to talk.” No matter how good-looking, Mr. Pigg was my first suspect.