You are here: Products Stuffed Shorts by Gilda Gang 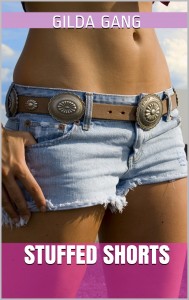 You’ll have a hard time holding on to your Kindle while reading these four hot shorts by Gilda Gang! This collection includes Ridden by Cowboys, Snaked on a Plane, Porked by the Police, and Stuffed and Basted. Read all about four different women getting what they’ve always secretly wanted from multiple hot studs at once.

Gilda loves to write stories with a bang! Her work is stuffed with groups of people having a sexy good time.