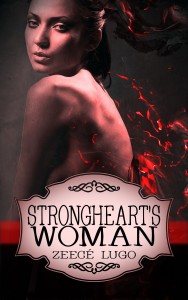 Two young girls close as sisters. Two lives to be lived. The world to be discovered.

One man to be loved! Victor Strongheart arrives to meet the princess that by written accord, he must take as wife. Annasai Songbird is everything a man could want: stunningly beautiful, sexy, bright, willing. Strongheart could not be happier. Her beloved cousin Setiyah is all nettles and stings, dark and dangerous as a stormy night. The lord is glad not to be marrying her. Until Setiyah dances in the moonlight! Under the glow of a full moon, the bewitching girl moves to the beat of tribal drums. Firelight lays shadows on the hollow at the base of her neck. The soft slope of her breasts glows golden and warm. She whirls, and the sound of the tiny beads woven into her myriad of braids is like the patter of raindrops on a summer’s eve. Lord Strongheart, his beautiful promised bride at his side, watches as one enthralled, bewitched. He knows well that the heart is a treacherous thing, and his has just betrayed him.

Daniel’s Fork was meant to be the first book in a romantic trilogy. Little did Zeecé know that stories have a way of going where they want to go. Daniel’s Fork turned out to be a journey to the future past! It is a sexy mystery set in the future, giving birth to a fictional universe: the Daniel’s Fork universe.

My writing comes from stories that have been playing on my mind for many, many years. My male protagonists have been inspired by the romantic heroes of authors such as Karen Marie Moning and Christine Feehan. My heroines are always strong, can-do females. I grew up on a diet of Latin novellas where the main female character is always crying and praying to the Virgin Mary. As a result, I hate helpless, weak female characters. Setiyah kills viciously when she has to and so does Gabby. They look weak but are nothing of the sort.