You are here: Products Stripped Down by Mae Harden 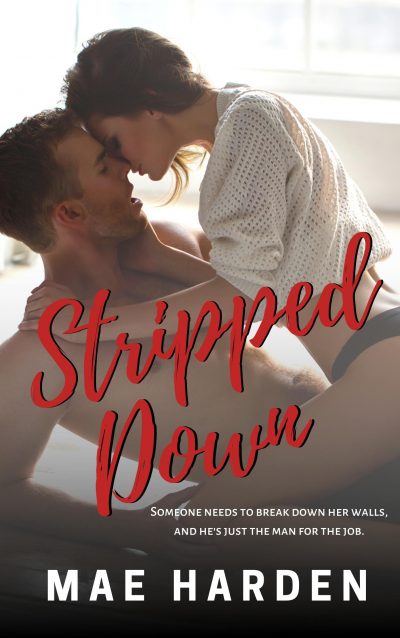 Stripped Down by Mae Harden

Baking is my thing. Bachelorette parties are not. Surprise strippers even less so. But I’m almost positive this guy isn’t really a stripper, and if he is, he’s pretty bad at it.
On the other hand, he’s very, very good at kissing. And maybe I shouldn’t have goaded him into doing it, but it’s not like I’ll ever see him again. At least I’ll have something to fantasize about when I’m baking muffins tomorrow morning.

Contractor. Loner. Stripper? Not usually, but I’ll do anything to get the Bachelorette party in the room next door to settle down. All I wanted was a good night’s sleep. I never expected my entire world to shift when she opened the hotel door with her wide green eyes and sweet vanilla scent. Now that I’ve had a taste, I can’t let her go. I just have to find a way to break down her walls.

Mae Harden writes contemporary romance with a penchant for dirty talk and a healthy dose of humor.

She lives in Virginia with her husband and two young children, a chunky cat, and a pair of trouble-making border collie sisters. She loves to bake and makes homemade wine to keep up with household demand. (Thanks, distance learning!)

Mae has a degree in Baking and Pastry from the Culinary Institute of America, but these days she uses her degree to add true-to-life details (and recipes) to her books.

I was actually in the middle of writing another book when I fell in love with the side character, Olive. I worked up a whole side story for her and once I started writing it, it took on a mind of its own!