You are here: Products Strings: A Love Story by Megan Edwards 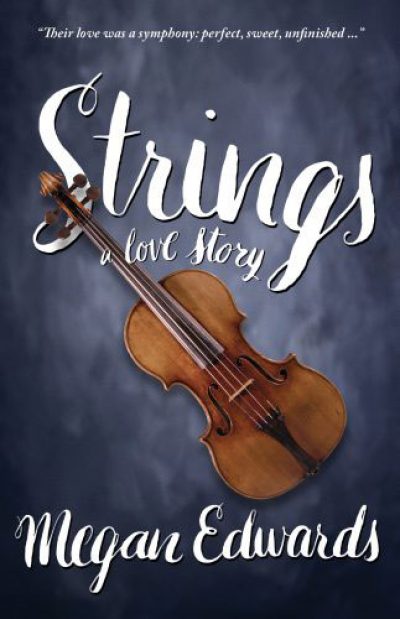 The Merino Rose.
Ted Spencer has a hard enough time believing the celebrated violin really exists. To find it sitting on his coffee table is nothing short of incredible. The stuff of legend, the exquisite Guarnerius has been missing for centuries.

But even though the renowned instrument is a violin lover’s dream come true, it holds only heartache for Ted. The value of the Merino Rose may be beyond measure, but he has acquired it at too high a cost.

Ted found his soul mate when he met Olivia de la Vega his senior year in high school. In the school’s production of Camelot, Ted was cast as Lancelot, Olivia as Guenevere. They should have spent their lives together but strings got in the way—family ties, career objectives, and the tangled web of fate.

Will the Merino Rose bring the two star-crossed lovers together at last, or will their love always remain the melancholy sound of distant violins?

Megan Edwards is the award-winning author of FULL SERVICE BLONDE, GETTING OFF ON FRANK SINATRA, and STRINGS: A LOVE STORY. All three novels were first-place winners of Benjamin Franklin book awards in 2018. Edwards is also the author of ROADS FROM THE ASHES: AN ODYSSEY IN REAL LIFE ON THE VIRTUAL FRONTIER, a memoir of her five-year adventure living and working on the road during the dawn of the Internet. At home in Las Vegas, Nevada, where there's never a shortage of fascinating material and inspiration, Edwards is working on her next novel.

The Merino Rose is sitting on my coffee table. I can see it in the lights I left blazing in the practice room, but seeing it doesn't make it any more believable.

What's even more incredible is that the Merino Rose, "the violin of angels" is actually mine. The Brahms Violin Concerto was played for the first time on this violin.

The King of Strings.

And it doesn't even exist. The Merino Rose was destroyed in the Trieste Opera fire in 1881. Everybody knows that. If a Guarnerius with inlaid roses around the back edge shows up at auction, it's got to be a fake.

Except? maybe not. What keeps those forgeries coming is that no one can prove that the fire destroyed the Merino Rose. No one can even prove the violin was actually in Trieste. It was Vittorio Bonacci who was there. Was the Merino Rose with him? Was he the thief who stole it from Joseph Joachim's Berlin conservatory.

The questions don't matter anymore. The violin is real. It's been gone for more than a century, and it vanished before reliable sound Strings recording was invented. Even so, the legend of the Rose's unsurpassed brilliance has lived on. It defies reason, but the world still mourns the loss of a violin no one alive has ever heard.

I knew this was the Rose the instant I heard that one note. Yes, I have years of experience playing and appraising stringed instruments, but that knowledge only served to corroborate what I knew the moment I plucked that string. The Merino Rose is more than a haunting memory. The world will soon find out that one of its loveliest treasures still occupies three dimensions.

I can already see the cameras, the microphones, the throngs of reporters. When I say the word, they'll be here, each one more eager than the last to hear the edict of Edward Spencer IV. They consider me an undisputed authority, after all, an expert with unimpeachable credentials to give them the answer to the one question they're all dying to ask.

Oh, they'll listen in rapt silence while I play the Brahms, and they'll pretend they care when I speak of the Rose's sweet perfection. But that's not what they're really after. All they want is a number.

In the end I'll give them exactly that, and they'll go away happy, believing I have priced the priceless. They will never know what it really cost to bring the Merino Rose to my coffee table. Only Olivia knows, and she's not here.

I discovered I was a string man when I was eight years old and attending summer camp in Idaho. The music counselor handed me a violin when I arrived, and the moment I felt the smooth wood under my fingers, I was smitten.

At first, it was the construction of the thing that captivated me. I come from a manufacturing family. yes, I'm a Spencer from the Spencer Luggage family, and I'd spent my early years hearing about the intricacies of design and fabrication. I'd hung around our factory in Los Angeles every day after school, and I could have constructed a suitcase single-handed by the time I'd finished fourth grade. The violin was far finer than a valise, and its curved surfaces fascinated me. Even the bow seemed like a work of art.

If you think it odd that I'd never touched a violin until I was eight, you've never met my father. Edward Spencer III thought music was fine, in its place. He'd sung with the Yale Alley Cats when he was in college, but that was over once the sheepskin traded hands. Singing was just wholesome recreation, the same as summer camp. There was no room for it in real life. Hobbies like building models belonged there, that was practical engineering. But music? Frank Sinatra on the hi-fi while you sipped your pre-dinner Scotch, that was where music belonged.

Fathers, however, have always had a hard time stifling their children's infatuations. I was in love with the violin from that first moment of contact, and I spent the summer making it mine. The music counselor, happy to find an avid pupil, spent hours with me, got me excused from canoeing and archery. By the end of the summer, I could play.

And play I did. When my parents came to collect me on the last day of camp, I was the star of the talent show, the centerpiece of a group that included the music counselor and two of his friends who were members of the Spokane Symphony.

My parents were very proud, and they seemed to listen carefully when the music counselor told them I was a "natural talent."

"He should have lessons," Mike said, and he gave them the name of a teacher in Los Angeles.

My mother agreed that I should continue studying violin, and she arranged for lessons with Howard Stiles, who had just retired as concertmaster with the Los Angeles Philharmonic. Mr. Stiles wasn't the name my counselor had suggested. My mother moved in Los Angeles social stratosphere, and if her son was going to study violin, the teacher would have to be Someone.