You are here: Products Stories in the Key of Erotica by Shelley Halima 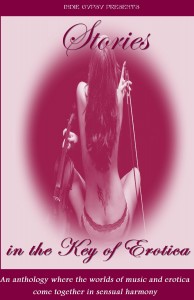 Stories in the Key of Erotica by Shelley Halima

I was fortunate enough to have Helen (who works at Indie Gypsy) select the stories for the anthology and I was quite pleased with her choices. Whether you like your erotica soft and gentle or hard and raw, you will find it between the pages of this book.

Tonight Hiro was bare headed and she saw that he had a birthmark on the left side of his forehead. Perhaps he had been born with this, his mother declaring the mark a sign of Hiro’s unique position in the world. Perhaps he defied their prophesies by moving to America and becoming a stylist. Now he stood aside, wordlessly smiling, bringing his hand to his forehead, as if he knew she’d noticed the birthmark and wondered at its meaning to him. In the poem, he had written that she kissed his careful face, loving eyes, maze of ear. No birthmark had been named in the poem, but she started there, as if it were an omen of their matching. She leaned close to him, as he had while cutting her hair, holding his head in order to kiss the mark. She had a similar mark on her body and with her fair skin she had many and she wanted him to see them all and kiss them all. As she kissed him, he put his arms around her and shut the door. Coltrane played in the background, that steady hum, steely rhythm of jazz. Dancing then with him that dance that had been so long in coming for her, she wouldn’t let him go. They stood holding each other, listening and holding.
“Coltrane,” she said quietly.
“Live. Transcendence from the CD Spiritual,” he said his voice hoarse. “It’s one of my favorites.” The saxophone wailed lamentation and exhilaration at once. Desire was some of both, and for a brief moment she wanted to weep, for what was gained brought with it the risk of loss.
“I like my haircut.”
He put his hand in her hair to hold her, to bring her closer. “I liked you from the beginning. I like your neck,” he said kissing her under her ear and down her throat, running his tongue along her shoulder bone. She thought about his body’s landscape, smooth brown chest and arms, lightly muscled, her imaginings immune from the geographical differences between their native lands. Hiro could be part of her story now, laying some ground for her living another day or at least for her wanting to. They threw their clothes away as though they would never need them again. Skin was some kind of miracle she could not fathom this night, as she stroked him all over, feeling too small to contain him, to contain her own throbbing self. Blood churned from her heart to her groin, as she opened for him, on top of him, looking down while he was inside her. Watching him entering her, his pleasure in his eyes was all part of the story. Under her left breast near her heart was a mark about the same size and color as Hiro’s. He held her breasts gently, fingering the beauty mark, in line with her erect nipple. As she moved, she felt him fill her.
“Hiroyuki. It’s a beautiful name.”
“You are…for me.”
“I longed for you and never knew it.”
“I have also wanted you for years.”
“Desire hides from us.”
“Love hides until we think it’s left us. Sneaky that way.”
When they were finished making love, they lay close, looking into each other’s eyes and smiling. “You smell good,” she said.
“It’s the tea. I made it before you came. What was perfect is now cold.”
“But what was cold is now perfect.” She shivered and put a sheet around them, a cocoon. The CD had switched now and gentle piano jazz was playing. Alice pressed her head close to his chest, reached up and stroked his cheek.
“Bill Evans playing piano,” he whispered and chuckled. “I put it on to impress you. You Must Believe in Spring, the CD is called. I thought you would love it and then love me just the way you have. I guess it happened without Evans-san’s help.”
“How wonderful,” she said wistfully, her voice, her thoughts drifting on the melody, her hands moving over Hiroyuki’s back, gently pressing along the keys of his vertebrae, as though she were playing the piano herself.