You are here: Products Stop the Press by Reese Patton 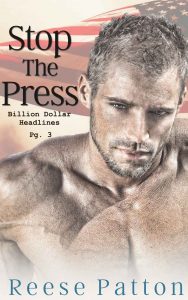 Stop the Press by Reese Patton

Traits that spell trouble in a man – and Stone, retired SEAL and head of security at the Daily Herald, possesses them all, and more.

When curvy and sweet Vivian gets dragged into dangerous games she never wanted to play, she flees her job, her life, and straight into the safe haven of Stone’s arms

If she can hide out for a few days, she can run far away and start a new life. Stone has other plans – priority number one is keeping Vivian safe, and that means keeping her close.

Will Stone convince Vivian he wants her just the way she is? Or will Vivian stop the press before Stone becomes her first?

The Billion Dollar Headlines series delivers a short and sexy novella to your doorstep every few weeks. Perfect for when you want a hot story but don’t have a lot of time. ​Read Stop the Press while it’s Hot!

Reese Patton lives in the Midwest with her wonderful husband who provides all the inspiration she needs for writing romances with happy endings. They share a house on a lake with two giant yellow Labs who generously keep Reese’s feet warm while she sits at her desk writing.

The documentary Born Rich and my addiction to True Crime podcasts added to the plot.

She was at work when her phone rang. She ignored it the first two times, but when it rang the third time, she made an excuse about it being a call from her family and stepped out of the office. A man’s voice cut through the headset.
“Vivian, I’m a friend of Merideth’s, you need to get out of there now. I’m just outside the building. Come down, and I’ll find you.”
Unfortunately, she left behind her purse and it wasn’t like she could really go back in and get it without raising suspicions. She also spent enough time debating about it that the man called her back. And then refused to get off the phone with her until she came out of the generic office building.
Once she walked through the door, he grabbed her arm and practically dragged her along behind him down the sidewalk. Vivian knew she wasn’t safe, but she didn’t realize just how unsafe of a situation she was in until Stone pulled her into a doorway and caged her body with his. To anyone passing by, they looked like a couple kissing one another goodbye.
She so wanted to ask him what was going on, but he wasn’t paying any attention to her. Instead, he was looking in the glass portion of the door and the reflection. After a few seconds, he pulled her back onto the sidewalk and they hurried down the street.
Vivian’s practically had to run to keep up with his long strides, but she managed to keep up. Until he pushed her into an alcove. She stared at the spot just below his shoulder blades. She couldn’t look anywhere else really. He stepped in front of her, effectively blocking any movement or view.
“Come on.” The man didn’t wait for her answer. He just grabbed her arm and pushed her into the car that had pulled up on the street in front of them. He hopped in behind her and slammed the door closed as it pulled out into traffic.
Vivian stared at the squared-jaw man who looked like he came directly off the recruitment poster for the marines. “I don’t even know where to start.”
He pressed his hand down on the top of her head and pushed her to the floor of the car while looking out the back window. “How are your evasive driving skills, Jase?”
“I’ll make a lot of left turns.” The driver barely glanced in his rearview mirror. “Why am I doing the pick up again, Stone?” He took a wide left turn and the oncoming traffic laid on their horns, but no one hit them.
“Because I put the rest of the team on Merideth and Ian and if I even pulled one of them off of watching her, he’d lose his shit.”
“Well, yes, but me?” He took another left turn and Vivian slid against the door.
“It was either you, or we take the subway.”
“What happened to your own car?”
“Pretty sure they made me. I’ll have someone else pick it up and switch it out.”
Vivian looked up from the floor of the car and bit down hard on her bottom lip. She wanted to cry. The man named Stone glanced down at her and offered Vivian a tight grin. His haircut might have been slightly tighter than his smile.
Vivian blinked back her tears and tried to smile back. “I saw you with Merideth?”
Stone nodded his head. He reached down and gave her shoulder a reassuring squeeze. “I’m bringing you to her. We’re going to keep you safe.”
“But why now? What happened?”
He glanced up at the man in the front seat. “We’ll talk about it later okay?”
Vivian nodded her head. She wasn’t sure why she trusted him, but she did. The same voice that told her to trust Merideth told her to trust Stone. She wrapped her arms around herself and closed her eyes. She thought that maybe keeping her eyes closed would be better, but it was the opposite. Her imagination ran wild with her and she saw scary men and dead bodies.
Vivian opened her eyes and stared up at the roof of the car. “Do I need to stay down here?”
“For now.” Stone leaned into the front seat of the car. “Next right, then go straight into the underground parking lot. I have two men at the gate. They won’t let anyone who doesn’t live there.”
“What are they going to do? Shoot ‘em?”
“Jason, just shut up and drive.” Stone leaned back in his seat and pulled Vivian over until she was sitting on the floor of the backseat between his legs. He pressed his hand against the back of her neck and rubbed is thumb over her skin.
Vivian didn’t want to feel soothed by the man, but she couldn’t deny that his touch comforted her and right then, she needed to feel comfort. “I left my purse.”
“Sweetheart, it doesn’t really matter if you left your purse or not, they already knew everything about you.” Stone grinned down at her.
“Who are they?”
“Later, sweetheart.” Stone looked out the rear window again, but he kept his hand on her neck.
As odd as the situation was, and as incredibly awkward as it was to be sitting between the man’s legs, she couldn’t ignore the overwhelming feeling of safety. Stone wouldn’t let anything happen to her. Of that, she was certain.