You are here: Products Stepbrother: Risky Desires by Madelin Brook 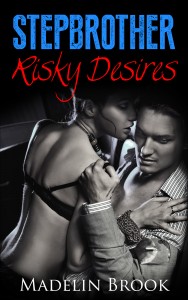 Anna had fallen deep for her stepbrother Derek, and she was tired of being in the house. When he purposes a night out, she didn’t think it could get any better. Willing to please and ready to take the risk, they venture out together. Anna didn’t know how much fun it could be to play with fire when in the public eye, but the secret touches and stolen kisses were enough to drive her wild. Derek was going to take Anna’s training to the next level, and his perfect slut of a stepsister was going to learn what it meant to be his in and out of the bedroom.

Madelin Brook was born in Orlando, Florida and is the oldest of six children. She always loved to write, and she previously worked for several different magazine editors in New York City. However, Madelin became sick of working for someone else and left corporate America to pursue her own career as a fiction writer. She has a passion for writing romance books, especially those that will take readers to their deepest fantasies. In her spare time, she enjoys traveling, shopping and spending time with loved ones. Two years ago, Madelin moved back to her hometown of Orlando, where she currently resides with her husband and one cat.

Be the first to review “Stepbrother: Risky Desires by Madelin Brook” Cancel reply