You are here: Products Stepbrother: Broken Passion by Madelin Brook 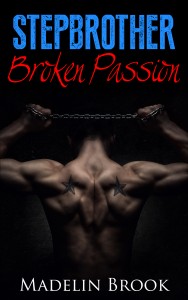 Anna never thought they’d get this far, but things had spun too far out of control before she realized who she really loved. Her stepbrother wasn’t doing it anymore, but his best friend seemed to be the man of her dreams. With her indecisive heart and passion leading the way, Anna devises a plan to get through and to where she wants to be. Derek may not know what’s coming, but his guilty best friend and curvy stepsister do. With passions high and emotions higher, Anna is about to steer them both down a different path.

“Yes.” She said, but barely. He nodded and stepped aside so that she could come in. Anna walked in, and Stacy was yawning in the kitchen hunched over some paperwork. She quirked a brow, but Stacy just smiled at her.
“Nice to see you. Don’t worry. I know.” She said, and she couldn’t help but to laugh at Anna’s face.
“Don and I share everything. I don’t mind sharing with you.” She teased her, and even though it was embarrassing it somehow made her feel a little better about it all.
“Thank you.” Anna squeaked out.
Stacy just nodded, giggling a little as she went back to whatever she was doing. Don spun her around and swept her into a kiss. She started to moan, and he kissed her softly, taking away her memory of what had happened with Derek. She wanted to forget, and Don knew that. Don wanted to make sure that Anna knew that here it’d be better, and if he knew his best friend, he knew that he had just been rather rough with her.
“Are you too sore?” He teased her, and she shook her head no. Despite being sore, Anna knew that she wanted this. Don swept her up in his arms, and Stacy was giggling in the background again. He kicked his bedroom door open, and he playfully threw her on the bed. She looked up at him, smiling with Derek a little further from her mind.

Be the first to review “Stepbrother: Broken Passion by Madelin Brook” Cancel reply