You are here: Products Stellar Bliss One: A Journey Of The Dreamers by Jedaiah Ramnarine 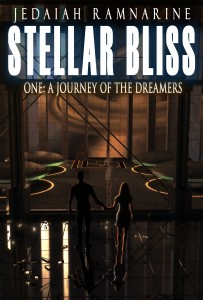 Stellar Bliss One: A Journey Of The Dreamers by Jedaiah Ramnarine

Set in a forbidden world where the truth is confidential and all is not what it seems. A blacklisted psychic drifter code-named J finds himself sick and tired of the force-fed routine in his perfect town of Quietville.

When he encounters a strange telepathic girl code-named C during his escape, their world becomes disillusioned, filled with danger at every corner as they come too close to uncovering the behind-the-scenes cover up that controls their world.

Will they break free of the bonds that chain them to this endless, bounded dream or will they remain nothing more than silent, hopeful sleepers?

Born on an island in the middle of nowhere, Jedaiah comes from a cinematic background, utilizing all form of media to deliver work that isn’t just artistic or entertaining, but deep and challenging, new and bold with an emphasis on humanity as a whole. The unknown is the fun and the adventure never stops.

Prologue
A middle-aged man walked into the dimly lit interrogation room, moving coyly as he made his way in. He pulled out one of the chairs by the table and sat casually, knowing backup’s just behind the glass window. A cold gaze beamed out of his steely eyes as he stared down the other, younger man in the room.
Something happened to the younger one. He’d done some things that caught the interest of certain people in certain places, and because of that, his life suddenly became so worthless that it was no trouble to them to destroy it. So, in comes this other guy, the older guy – that sneaky agent-type who’s up to no good with an offer you’d be stupid to refuse.
“It’s either this or you die.” The older man snarled.
“I had no idea I was such a threat.” The younger man felt flattered.
“You also had no idea the world doesn’t allow your kind to walk freely.”
“Maybe.”
“So what’s your decision?”
A defeated yet courageous indifference struck the younger man. There would be another time to fight. Another time to let the rebel out. At that point, he had to give in.
“Fine.” A bitter taste left his mouth.
“There’s a good lad.”
Being talked down to, in addition to signing your life away was not the easiest thing to stomach, but the truth is, the older man held all the cards. The decision at the end of the day was that the young lad dies or he signs his life away to ‘Specialized Interests in Psionic Research and Technology.’ Hell of an offer! Especially when you have no clue what Psionic Research is. Nevertheless, it’s either that, or you die.
So, which one would you choose?
“Wait.” The younger man reached for the older agent who was already at the doorway on his way out – “What about her?”
The agent stopped dead in his tracks, slightly cracking open the door so the light from the hallway came in blindingly.
“We’ll take good care of her. Don’t you worry about a thing.” He smirked – “After today, who you are, what you were – none of it matters. All you have to know, is that you, are now Bliss One.”

Be the first to review “Stellar Bliss One: A Journey Of The Dreamers by Jedaiah Ramnarine” Cancel reply