You are here: Products Staking A Claim by Devon McKay 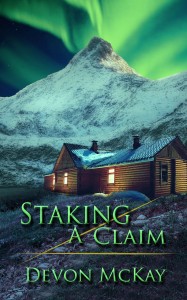 Staking A Claim by Devon McKay

For most people, seeing Alaska is a dream come true. For Miami Beach resident, Samantha Held, it is merely a job assignment. Creating an advertisement for vacationing in the state gets her one step closer to achieving her career goal—partnership in Kolinsky’s Advertisement Agency.

Blake Langford is not willing to accept any exploitation of his beloved state, no matter how desirable the striking, southern blonde bombshell with fiery green eyes is, and he’s determined to sabotage Sam’s goal in every way. Falling in love with the enemy, however, was never part of the plan.

After writing her first novel, Cowboy on the Run, she embarked on a new adventure and now lives on a ranch in Ohio where she calls home. Although the farm life is slightly more laid back than the dangers of Alaska, Devon enjoys the slower pace of the country lifestyle which gives her plenty of time to indulge in her passion of writing.

I lived in Alaska for several years and always wanted to write a book about the state.

“I’ll be your personal guide,” he said in a low tone, shocking with her the surprising proposal.
Sam stared at him, stunned, but skeptical. “What’s the catch?” she asked suspicious of the offer. There had to be a catch.
“There’s not one,” he shrugged.
Unconvinced, she crossed her arms over her chest and leaned back into the chair. Hadn’t he just informed her he hated what she did for a living? And now this? Definitely, a catch.
“Okay, a small one.” He mirrored her reaction and folded his arms across a brawny chest before casting a challenging glare. “You have to portray Alaska in the right way.”
Offended, Sam scoffed. As if she wouldn’t? Showcasing subjects in the perfect light was part of her job.
A job she was good at.
Blake appeared to be unscathed by her response. Or worse, he simply ignored it. “Alaska sells itself. I want you to inform people…. make your tourist trap advertisement informative.”
Seething, her gaze locked with his. Although, miffed, she considered his offer. Sam couldn’t have asked for a better opportunity to be dropped into her lap. She could learn everything she needed to know about Alaska and have an attractive, although somewhat territorial, guide to show her.
Tempted, she pictured her new office….the view of the ocean….partnership.
“It’s a deal.” She offered her hand coolly despite the quickening of her heartbeat. “I haven’t officially introduced myself. Samantha Held. I go by Sam.”
“Blake Langford.” The warmth of his fingers engulfed hers and he held on for a moment too long. “I go by Wolf,” he said, stealing her breath away with a devilish grin.
An odd pulsation spiked beneath her skin and she second guessed her decision.
What kind of fool made a deal with a man called wolf?