You are here: Products Spicy Christmas Kisses by Bonnie Edwards 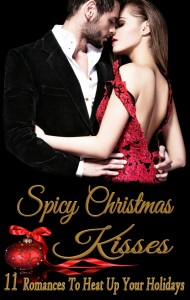 In winter’s chill comes a season of warmth and love, filled with memories and hope. Light up your Christmas season with these ELEVEN steamy romances from bestselling, multi-published, and award-winning authors. Let SPICY CHRISTMAS KISSES bring you the joy you yearn for with eleven happy endings!

That’s right! Santa’s bringing love this Christmas…and a little spicy romance! From second-chance at love, to taming the scrooge, to matchmaking mutts, SPICY CHRISTMAS KISSES delivers the joy and warmth of the season. Enjoy your mulled wine with ELEVEN romances that are HOT! HOT! HOT!

The story came together very quickly after that and Not-So-Blue Christmas was written! I always loved the idea and it was such a relief to finally figure out why I’d stalled.

Christmas Flirt – Rachelle Ayala
Naughty girl Lacy Reed gets more than she bargained for when her naked selfies turn up on her boss’s phone. What will it take for her Christmas wish to come true?
Cole For Christmas – Kelly Collins
When Interior Designer Chloe Craig thought of Christmas, her mind overflowed with trees trimmed in twinkling lights and doorways adorned with mistletoe. Using her infectious joy, she attempted to soften the heart of her new employer, but was it possible to turn a Scrooge into Kris Kringle?
Not-So-Blue Christmas – Bonnie Edwards
Kirk Fontaine has lived in the dark for months, unable to bear living or even talking to people, until one small mutt forces him to see the sun. Miranda Bailey’s hoping for one more Christmas miracle, but can’t believe a grouch like Kirk could be it.
Naughty and Nice (A Rough and Tumble Novella) – Crystal Green
Reclusive, gruff army veteran Jesse Navarro could deal with a Secret Santa who only wrote to him online. But when she shows up at the Rough & Tumble Saloon in the flesh, she has something even naughtier than a regular gift exchange in mind—and it’s perfectly suited for some wicked nights in Sin City…
Tangled in Tinsel – Stacy Eaton
Casey Lowe is new in town and her next-door neighbor Thad Wagner is the kind of guy you want to have around, especially when something breaks. Thad is easy on the eyes and great with his hands, but will he be able to mend her broken heart?
Haunted – Jade Kerrion
Holly Langford has given up on love but the Christmas season unexpectedly ignites her bleak and solitary life with three men who represent her past, her present, and her future. Which man offers the gift of true love and happily ever after?
The King and the Pawn – Lyssa Layne
Frankie has concocted the perfect plan to get her father to release her trust fund early—a fake boyfriend he’ll hate. The only problem is, the more time Frankie spends with her fake boyfriend, the harder it will be to let him go.
Christmas Choices- Sharon Coady
Kellen Slade is a bad boy builder who rides a Harley almost as hot as he is. Rhian St. Clair is a rich girl who wants out of Savanah and out from under her father’s rules to follow her passion as a painter.
8 Hounds a-Howling – Marcia James
Celebrity photographer “Jax” Jackson volunteers to shoot the Klein’s K-9s’ dog-themed “12 Days of Christmas” fundraising calendar. His hidden agenda: Convince past love and calendar coordinator Amy Walters to give him a second chance.
Tinsel, Tidings, and Temptations – Kimmie Easley
After a nasty divorce and a life of isolation, Naomi Compton rents a luxury cabin in the woods for her first Christmas alone. The property just so happens to come with its own hunky groundskeeper, Henner Willliams, who’s more than happy to show Naomi what she’s been missing out on all these years.
Loving Lucy – Chantel Rhondeau
Issued a challenge at the company Christmas party, reserved accountant Blake Carmichael determines to catch Lucy Brier’s interest, a woman he’s lusted after for years. Lucy’s determined to win her bet: quit flirting and stay single until next Christmas…a full year without a man, next to impossible for the audacious brunette.