You are here: Products Special Rewards Book 2 of The Coursodon Dimension Series by M.L. Ryan 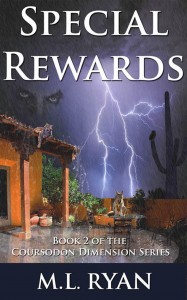 What would you do if you discovered there was a parallel dimension?

Hailey Parrish used to be an average, everyday human. Boring, in fact. After being possessed by Sebastian Kess, a magically inclined enforcer from the parallel dimension Coursodon, her life took a decidedly less mundane turn. Besides coming to grips with the existence of supernatural beings, she risked her life helping Sebastian and her heart falling for his protégé, Alex Sunderland. Now, Hailey has to deal with the bit of arcane power that Sebastian left behind when he returned to his own body and try to stay out of the crossfire when an unknown assailant seeks revenge against Alex.

I landed sprawled on the floor on my back, Alex covering me with his body. Normally, I have no problem having him on top of me, but in this situation, I just felt squished. His face was mere inches from mine, and even in the dark I could tell he had morphed into Xyzok-mode. He placed a finger to his lips to make certain I would stay quiet and rolled off me into a crouch.
“Stay here, and stay down,” he whispered with such intensity, there was no way I was moving even if I had been so inclined. Which I wasn’t. Slipping silently across the room, he grabbed his gun from a drawer in the small desk across from the sofa, popped the clip in place, and returned to where I was laying. “Sit up, but keep your back to the wall.” I complied, and when I was upright, he handed me the gun. Still keeping his voice low, he said brusquely, “You know how to use this, right?”
I nodded with as much moxie as I could muster, which probably wasn’t much, considering it felt like my heart was about to pound out of my chest. Alex, being a well-trained Xyzok, was used to random shit like this happening. He seemed alert and ready to spring into action. I, on the other hand, was completely thrown off by this unexpected assault on my own turf.
“I’m going to check outside,” he continued. “If anyone comes in here while I’m gone, shoot. Aim for the chest. It’s the biggest target.” He started to slink away, but turned back and added, “But make sure it’s not me.” He winked, and then moved stealthily to the still partially open sliding door to the patio.
He moved like a predator stalking its prey; completely focused on the task at hand. Vigilant, nimble, deadly. Beautiful and enthralling. If I wasn’t so rattled, I probably would have been turned on.

Be the first to review “Special Rewards Book 2 of The Coursodon Dimension Series by M.L. Ryan” Cancel reply