You are here: Products Special Interests by Emma Barry 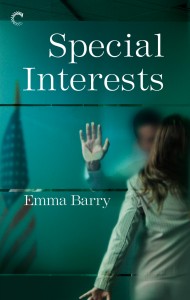 Compared to love, politics is easy

Union organizer Millie Frank’s world isn’t filled with cocktails and nightclubs…until she’s turned into an unwitting minor celebrity. As if being part of a hostage situation wasn’t traumatizing enough, now her face is splashed across the news. But Millie’s got fresher wounds to nurse—like being shot down by the arrogant bad boy she stupidly hit on.

Parker Beckett will do whatever it takes to close a deal for the senate majority leader, including selling out union labor. Charming and smart on the surface, he’s also cynical and uncommitted—an asset on the Hill. But something about Millie has stuck with him and when negotiations bring her to his office, Parker breaks his own rules and asks her out.

Parker can’t understand how Millie has retained her idealism in a place like D.C. Millie can’t believe what Parker’s willing to sacrifice in order to pass a budget. But as they navigate their political differences, what grows between them looks a lot like a relationship…and maybe even a little like love.

Emma Barry is a novelist, full-time mama, and freelance editor. She is the author of Special Interests, Private Politics, Party Lines, and Brave in Heart. When she’s not reading or writing, she loves hugs from her toddler twins, her husband’s cooking, her cat’s whiskers, and Earl Grey tea.

I write the kind of romances I like to read: a hybrid alpha or beta hero who is certain pretty early on that the heroine is it for it for him, a smart, conflicted heroine who is making a choice, and a sexy, urban setting that’s very much a mash note to DC, a city which I love.

Chapter 1
“Oh good, it’s not too crowded,” Alyse said over the throbbing ba-doush-doush-doush of dance music as they approached Tom Tom.
Millie Frank glared at her roommate’s back. Obviously they understood the word crowded differently. Tom Tom was packed, even by the standards of a Thursday night in Adams Morgan. Every stool around the bar had an occupant, the dance floor teemed with sweaty bodies and the tables were all full. Granted, there was just enough space between the people not to qualify as a fire hazard—that must have been what Alyse meant.
As she crossed the threshold, the completely predictable thing happened: heads clicked toward Millie in unison like some sort of bizarre theme-park ride. All they needed now was some creepy music and choreography to complete the picture. It’s a damned small world after all.
One week ago, the incident had occurred. An incident of such gargantuan proportion and humiliating potential that even by the standards of her life, it stood out. Every twenty-four-hour news network had spent the better part of an afternoon covering her.
This stuff never happened to Alyse. This stuff never happened to anyone. Millie sighed and let her head fall forward onto her chest, trying to ignore the pointing and whispering not even Europop could hide. The attention had to go away eventually.
For the moment, she was a minor celebrity. Oh, not one who had had a baby at sixteen or who had learned to ballroom dance or who had proposed to someone on network television. Not, in other words, a real celebrity. No, more like a D-lister who went to rehab or the younger sister of a socialite with a sex tape.
“Are you sure this is a good idea? This isn’t really my scene,” she shouted into Alyse’s ear as they pushed through the crowd.
“For a week you’ve only left the apartment for work and therapy. You spend twelve hours a day sleeping. You’re hibernating. Clearly we need to get you out of your scene,” Alyse shouted back. A cover-girl-pretty blonde, her roommate spent days raising money to ensure that girls in the developing world could learn to read and nights feasting on DC’s limited nightlife. In other words, Millie’s polar opposite.
She swallowed a sigh. While she’d never admit it aloud, Alyse had a point. When they reached the large table their friends had snagged, someone offered her a drink. Actually three drinks appeared and she accepted the sticky pink Cosmo.
Margot, a pale redhead who lobbied on environmental issues and who could always be counted on to wear fabulous non-leather shoes, was saying, “I had to wait for three trains before one came with any room to get on. But it was okay because it had the Barry White conductor.”
In response, the girls crowding the table squealed, “Go forth, Farragut North!”
Yeah, that guy was famous—much more appropriately than Millie. At least he had a skill. Young DC had raised complaining about the Red Line while celebrating public transportation to an art form. Only artisan varieties of infused vodka inspired more enthusiasm.
Uninterested in trading more Metro stories, Millie sipped her drink slowly and scanned the room. Crowding the club were your interns, recognizable by their inappropriate interpretations of business casual and their frat party lingo. There were your nonprofit and advocacy types, like herself, though often much crunchier. And there were your escapees from the Hill and the White House. The latter could usually be found clutching smartphones or, in the most obnoxious cases, still wearing their hard passes. Nothing spelled sexy like a guy who wanted you and everyone else to know he had access to the OEOB.
Tonight she was surrounded by lots of drunk people who wanted to change the world. Change it and manipulate it and convince voters they wanted to change it in ways other than how they actually wanted to change it and…well, it amounted to the same thing.