You are here: Products Space Lords: His Earth Maiden by Michelle M. Pillow 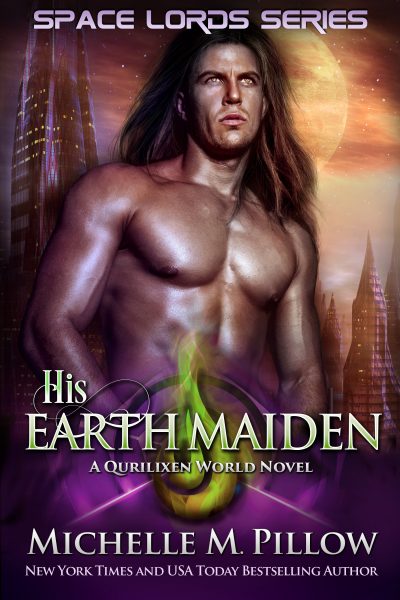 Former elite Federation soldier, now turned space pirate, Jackson Burke has done his best to turn his life around—for the better. He isn’t prepared when fate leaves a woman’s safety totally in his hands. Since heroes don’t leave a damsel in distress—and despite being outlaw pirates, the crew considers themselves the good guys—Jackson assumes responsibility for the beauty. It’s enough that his ship is held together by rust and sheer will, now he’s got to keep this good guy thing straight and not give into the urges the sassy female brings out in him. Raisa is everything a man could want and for some reason she seems to like him, rough edges and all, but he’s on the Federation’s wanted list and they aren’t known to back down.

NYT & USAT Bestselling Author Michelle M. Pillow is an award-winning romance writer with over 100 published books over the course of her nearly 15-year career. She is best known for her Quirlixen World including the series: Dragon Lords, Space Lords, Lords of the Var, Galaxy Alien Mail Order Brides, and more.

Michelle is always up for a new adventure or challenge, whether it's a paranormal investigation of an old Vaudeville Theatre or climbing Mayan temples in Belize. She was a refugee extra on SyFy's Z Nation (2016).

The Space Lords series is a series installment in the sci-fi romance Qurilixen World collection. It came naturally as the characters from previous series began leaving their planet for the high skies.

Excerpt from His Earth Maiden

Raisa had been mugged and left for dead, buried in the hot sand dunes on the Black Market of Torgan.

The sand slid beneath Raisa’s feet, making it hard to walk. The breeze stirred the granules until they found their way into every nook. She covered her mouth with her arm and kept her head down.

It felt like an eternity before she reached the modern complex. Metal steps led from the sand to the glass barrier that would let her back inside. Breathing hard, she pulled her herself up by the rail as her legs shook to keep her upright. Her head pressed against the glass and she waved her arm in front of the scanner. It didn’t immediately open to let her pass and she had to make several attempts.

When the glass finally slid open, she wasn’t ready for it and she fell forward onto her hands and knees. The door slid shut and the ventilation turned on, blowing up from the floor to suck the dirt from her body. The cool breeze was welcome, and she was disappointed when it stopped. She crawled into the complex. The metal floor turned to concrete. She collapsed forward, letting her body soak in the cool.

Raisa had no idea how long she lay on the complex floor, or if she even retained consciousness for that time. Not one person stopped to offer assistance. The universe really was a lonely place.

Her mind raced, as if trying to shock her body into action. She couldn’t stay on the floor. She needed to get to the ship she’d commissioned for a ride. She needed to find someone with a part for her…

For the unit they had stolen from her. Her molecular gastro-spectrometer was gone. Without it she couldn’t work, and there was no way she was going to find another one.

Raisa wanted to lay down and cry, but the sound of footsteps propelled her into action. She gritted her teeth and jerked her body upright. Her left leg felt numb and tingled each time she put pressure on it. She limped down the concrete walkway, past the rows of ships.

The rough mix of humanoids and other aliens milled around the docking lot. She kept a lookout for the traders who had double crossed her, but really didn’t trust anyone she saw. A hairy creature with matted braids all over his body argued with a short green humanoid who had over a dozen tiny horns poking out of the top of his head. They stopped when they saw her. Raisa averted her gaze and held still until they continued on.

Alien creatures didn’t frighten her. As strange as they might look to her with their blue skin, or wings, or reptilian flesh, she probably appeared just as odd to them. Her mother, Janice Lovell, had been a human from New Earth, and her father, Harpin, was Angelion. She didn’t inherit his wings, but she did have his knack for repairing mechanical and electrical things. Angelions were particularly adept when it came to technology. It’s probably why she was so good at figuring out the recipe codes for food simulators.

People said she looked like her mother, though Raisa barely remembered the woman. Janice had been part of a technophobe movement and refused medical treatment for an injury. At five years old, Raisa didn’t understand. Later in life, however, it became difficult not to resent the woman for not fighting to survive. It was fairly obvious Janice’s rejection of technology had come from her breakup with Harpin. They didn’t part on nice terms.

She wondered why she was thinking of her parents. Maybe it was because she had no one else to think about. Jobby Dawks deposited space credits into her account. They always got along, but she wouldn’t go so far as to call him a friend. She’d made various contacts around the universes, some she’d even been invited to stay with in their homes as she studied every culinary dish they knew how to make. Food simulators were big business, and the more cultures they could represent with their recipe collections, the more units they could sell.

Why was she thinking about work? Raisa touched her head, and realized she was leaning against a metal hull for support. Beneath a layer of sand on her forehead was a sticky substance. She pulled her fingers away and saw blood. A hot tear slid down her cheek. She swiped it with the back of her hand. She did not want to be here, alone, on a dangerous outpost filled with criminals. There was always a risk when she landed at a new location, but this was what her mother would have called the fallen angel’s playground.

Raisa stumbled. Kod and Dak hadn’t bothered to make a run for it after leaving her for dead. She found them in the docking lot, standing near the bag that contained her molecular gastro-spectrometer. She would have guessed them to be brothers. They had the same look to them—not just the shape of their green faces and oval bald heads, but the way they carried themselves. Each had a way of opening their mouths ever so slightly at the corner after finishing a sentence. This had been her first encounter with their kind, and she didn’t know what manner of aliens they were.

Anger filled her, temporarily erasing the pain as she focused on that bag. She wasn’t about to let them keep it. Raisa backed away until she was just out of sight and crossed the narrow walkway to the next row of docked ships. She ducked beneath them, limping from one metal protrusion to another. As she neared the brothers, she leaned down onto all fours and crept forward. The bag was in sight.

Raisa crawled forward. The pain in her leg couldn’t be ignored each time she put pressure on her knee. The belly of a ship came too low and she had to stretch onto her stomach. All she had to do was slither forward on the floor and grab the bag while they were deep in conversation. She reached her hand forward and dug her toes into the ground to inch closer.

Raisa hooked her finger on a strap and began to pull.

The sound of the bag sliding against concrete caught the brothers’ attention, and they both turned to look at her. Disbelief registered on their faces. Dak made an awful sound, a cross between a scream and a growl.

Raisa held the bag tight and tried to thrust herself back. But with the weight of the bag, her awkward position beneath the ship, and her beaten body, it was difficult to move.

As Dak’s fist came barreling down toward her head, someone grabbed hold of her ankle and pulled.

She cried out in surprise as she slid out of Dak’s reach. The bag skidded with her. She passed beneath a pair of spread legs. A man placed himself between her and the attackers. From what she saw from her place on the floor, he had long dark blond hair and broad shoulders. The skin on the back of his arm looked to be human.

Kod and Dak ran around the side of the ship. She knew first hand that they had fists like lead hammers. Dak punched and the man artfully leaned to the side. The blow missed its mark, darting past the man’s head. Before Dak could pull his arm back, the man grabbed his wrist and flung his arm to the side.

Dak spun under the force of the push, and his fist made contact with his brother’s nose. Kod screamed in pain as he fell back before covering his bloodied face.

Raisa pushed up from the ground as Dak charged the man. She gave a small cry of exertion as she swung the bag along the floor at Dak’s feet. The molecular gastro-spectrometer hit the man’s ankles.

Dak lost his footing, flung to the side, and hit his head on a ship. The loud thud reverberated around them. He collapsed on the floor.

Amidst the strange screeching cry of Kod, she tried to pull her bag closer. Her muscles trembled. She couldn’t force herself to stand.

“Come with me,” her rescuer ordered.

Raisa looked up at him.

“On your feet,” he said, the tone both commanding and urgent as he glanced around.

She tried. She really did. Adrenaline and self-preservation could only take a body so far, and she had hit her limit.

He grunted, and she wasn’t sure if he was annoyed or disappointed as he leaned over. She held up her hand, thinking he meant to pull her to her feet. Instead, he grabbed her wrist and used it to propel her over his shoulder. He held her steady with one hand and grabbed her bag with the other. The press of a muscular shoulder to her stomach was far from pleasant as he jogged across the docking lot to another row of ships.

By this point, she had no protests left in her. Raisa hung limp, fighting to hold on to her conscious mind before finally giving in to the pain. Her vision dimmed as she watched the backs of his legs.

Be the first to review “Space Lords: His Earth Maiden by Michelle M. Pillow” Cancel reply