You are here: Products Soothsayer by Kathryn Amurra 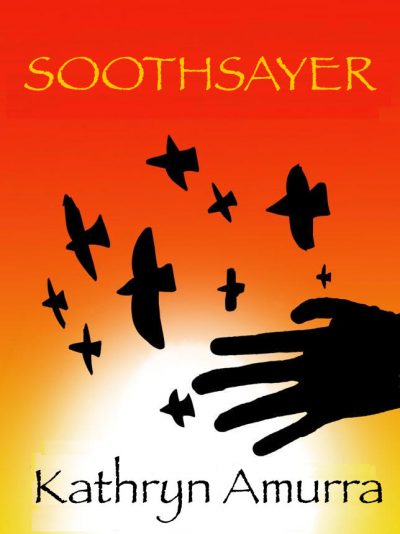 Aurelia has always valued love and happiness over titles and power. Though her kind-hearted father has allowed her to turn away suitor after suitor in pursuit of a love she cannot yet define, when he dies her choices die with him. Knowing that marrying the elderly governor of a neighboring province can secure her mentally challenged brother’s safety, she gives up on her dream of finding love in return for his protection.

Cassius is the ill-fated captain of the governor’s guard tasked with escorting the Lady Aurelia and her unpleasant aunt to the governor’s estate. Since the soothsayer Tullia foretold an early death for him, Cassius wants nothing more than to keep his hands busy with labor and his heart free from any connections to the world he believes he will be leaving soon. As they work through a series of misfortunes on the road to the governor’s province, the words of the soothsayer start to make sense, and together they find the courage to allow their true destiny to unfold.

Kathryn Amurra is an intellectual property attorney by day and a writer of Romance novels by night. Some of her best writing takes place between the hours of 10PM and midnight (or later) when she has “logged off” from her day job and her hubby, three girls, and boxer are asleep. She currently lives in Charlotte, North Carolina, where she is working on the next book in her Soothsayer’s Path series set in Ancient Rome.

A couple of summers ago, my husband and I were looking to buy a plot of land. We went to see one of the plots that looked interesting to us, along with our three little girls. As we walked around, we came to an area that was overgrown with brambles. We had to pass through it very carefully, so I picked up my youngest and wrapped my arms and my jacket around her, trying to protect her. As we walked, I thought to myself, this would make a great scene in a romance novel!

Aurelia watched as Cassius struck again, and again, each strike more forceful than the last. She could see from the way he brought down the sword with each try the mounting tension in his body. Finally, no more than two steps into the field of thorns, Cassius growled a barely audible curse, then turned to face Aurelia. He wiped the sweat off his brow with the back of his hand, his chest visibly rising and falling as he tried to catch his breath.
She knew better than to say anything, and in any case the intensity of his eyes as he looked at her told her everything she needed to know.

As his breathing slowed and his temper cooled, he sheathed his sword and stepped closer to her. “These vines do not intend to be cut today, but perhaps we do not need them to be cut. My lady, please forgive the impropriety of this request, but if you will follow my instructions, I think we may be able to make some progress against this terrible field of thorns.”

Aurelia replied without hesitation. “Ask, and I will do as you say.”

Looking as though he had expected more of a fight, Cassius nodded. “Please, if you would come closer, my lady.”

Ignoring the lightness in her stomach at his request, Aurelia moved closer to him.

“If we cannot cut the stubborn vines, then perhaps we can move them away, far enough and for long enough a time that we may pass by.”

He took his shield in his left hand and held it in front of him. It was an oval piece of wood covered in leather that extended from his shoulders to his knees.

“I will hold my shield in position and move forward through the brambles, as though charging the enemy. If you will walk closely behind me—and I mean closer than my own shadow—then I can be your shield, and we can both get through to the other side. Do you understand?”

“I do,” she began, “but your shield is not big enough to protect you from the thorns.”

“It is true, I would give anything for my legionary’s shield at this moment, but this shield is what we have, and it will do.”

He took a breath and turned around to face the enemy thorns.

She stood a couple steps behind him and did not move.

He turned his head to look at her and motioned for her to come to him with his free hand. “My lady,” he said, almost shyly.

Aurelia felt a tingling in her chest, but took a step toward him.

“My lady, I cannot protect you unless you are right behind me. Please.”

She took another step, until her toes were nearly touching his heels.

“I sincerely apologize for the seeming impropriety of what I am about to suggest, but, if you would, please, have your feet touch mine, so that we may take each step as one. And I think it may be easier if you would—if you don’t mind, that is—put your arms about my chest and bury your head in my back. Just let me lead you. Trust me, my lady.”

“I trust you, Cassius,” she said, just loud enough for him to hear. She had not intended on saying his name.

Cassius nodded, then looked away from her and raised his arms. She appreciated the fact that he could not watch her tentative movements as she willed each arm to be raised to the level of her chest, her hands still gripping the edges of the cloak he had put on her. She slid her feet forward until her toes touched the heels of the soldier’s shoes, at the same time bringing her arms full circle around his broad chest.

She felt his right hand gently grip each of her wrists in turn through the cloak she still held tightly in her balled fists and pull her arms more closely against him, until she had no choice but to allow the fronts of her thighs, abdomen, and chest to be pressed against his body.

She swallowed hard and, closing her eyes, brought her forehead to rest against the soldier’s back. At her touch, she felt his strong body tense up, then gradually relax.

She answered softly, speaking into his back. “Yes.”

Be the first to review “Soothsayer by Kathryn Amurra” Cancel reply