You are here: Products Something Slightly Sinister – Short Tales With A Twist by Rebecca Hall 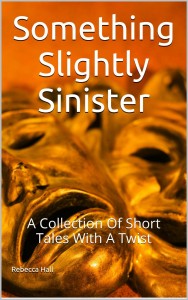 Something Slightly Sinister – Short Tales With A Twist by Rebecca Hall

A collection of spooky, suspense-filled and sometimes sinister short tales, all with a surprising twist. The Watcher – Alex has been watching people for a very long time now but his latest project turns out to be more complicated than he originally anticipated. The Domestic – Patrick becomes very worried when an argument with his wife goes a bit too far. The Journey – Public transport can often be uncomfortable with so many people on board but nobody thought it would end like this. All In A Dream – Anita can’t escape the nightmare that keeps on coming back to haunt her. But what is it trying to tell her? What Friends Are For – Most people will do anything for their friends but, had she known, Stacey wouldn’t have volunteered for this favour. Housemate From Hell – What starts as a frustrating evening soon takes a rather sinister turn. The Chase – Annie only wanted a trip out round the shops but this one turns out to be a little more tense than she expected. Dinner Date – Marjorie always tries to cook the best for her husband. But sometimes his requirements can cause her to go to some extraordinary lengths. The Netball Game – Three beautiful girls with less attractive personalities engage in a game that will leave them bitterly disappointed. A Walk In The Park – A simple stroll through the local park can sometimes lead you to some surprising revelations.